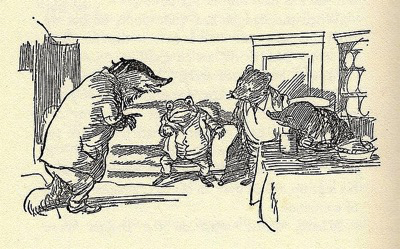 Picking up on my theme of yesterday I was reminded of a scene from The Wind in the Willows by Kenneth Grahame. In the central chapter ‘Mr Toad’, the Badger aided by the Mole and Ratty has decided to take Toad in hand. The wrecking motorcars and generally failing to live up to the normal standards of an Edwardian Gentleman and landowner have come to a head and the time has come to take action “Independence is all very well, but we animals never allow our friends to make fools of themselves beyond a certain limit; and that limit you’ve reached”. So Badger leads Toad into the Smoking Room and a long sermon ensues, punctuated by the sobs of an apparently repentant Toad. Satisfied with his work Badger leads Toad out and asked him to repeat his column promise to give up motor-cars entirely and forever to his friends.

Up to this point Badger has commitment, but now the session over and commitment needing to be public and irrevocable the context changes and Toad refuses, going further in saying:

‘Oh, yes, yes, in THERE,’ said Toad impatiently. ‘I’d have said anything in THERE. You’re so eloquent, dear Badger, and so moving, and so convincing, and put all your points so frightfully well—you can do what you like with me in THERE, and you know it. But I’ve been searching my mind since, and going over things in it, and I find that I’m not a bit sorry or repentant really, so it’s no earthly good saying I am; now, is it?’

It takes another wreck, imprisonment, escape and the loss of his home to reach the point where Toad has truly changed. To achieve change we have to change context, and manage a cathartic moment or two.

A return to constraints

I’m getting increasingly excited about the work I am doing on constraints. I first posted ...