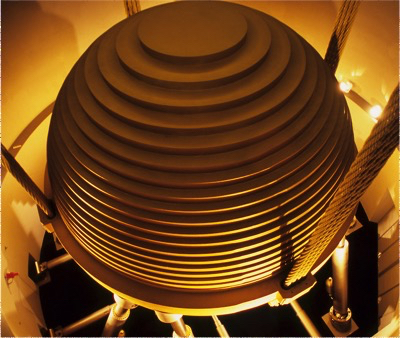 The first time I went to Wellington I tagged on a visit to a speaking engagement in Brisbane around twenty odd years ago. I was still making my name then so I was on a two day trip in economy from the UK with one night in a hotel. I sort of knew about earthquakes in theory but was the first time I had experienced a minor quake and the first time I had seen a what to do in an earthquake warning on the door of a hotel room. Staying on Lampton Quay also makes you aware of the power of an earthquake, that shopping street having been the shore line before the 19th Century quake that raised up new land. Following the recent quake there is an increased awareness of the threat with some buildings evacuated and many now advertising their degree of earthquake readiness. That process involves various architectural features that dampen the effects of any shock. The illustration is a 730 ton tuned mass dampener in a building in Taipei that stabilises what is one of the world’s tallest buildings.

Now that was a rather rambling introduction to a point I want to make in the wider context of my various posts on the tyranny of the explicit (starting with a post of that name). In a world mediated by the explicit content and echo chamber effects of social media it is far too easy for tropes to promulgate within any inhibition or dampening effect. My own line definition of a dampener is a thing that has a restraining or subduing effect with the rather interesting illustration: “television and booze, those twin dampeners of the revolutionary spirit”; a modern take on Marx’s famous (and to my mind dubious as a universal statement) designation of religion as “the sigh of the oppressed creature, the heart of a heartless world, and the soul of soulless conditions. It is the opium of the people”. The one thing that people provide in a virtual environment is a dampening effect. it is oh so easy (as I know to my cost) for an exchange on social media to escalate into conflict oh so quickly. A conversation that would be inhibited in a person to person environment by the natural constraints of social interaction can break into open conflict in minutes. The explicit has more inherent ability to support aggression and misunderstanding that any physical environment where more clues are available for the exercise of human judgement.

So in any use of the virtual, we need to ensure that we have some mechanism to introduce human judgement as a dampener before the edifices of techno-fetishism break catastrophically under conditions of stress. Slowing down algorithmically promulgated prejudice and hate will need to be a key focus of the next decade if we are to survive. More on that in future posts as I develop my various polemics against the explicit into some practical ideas on resilience.

This post is illustrated with Body of Knowledge, a steel sculpture created in 2010 by ...

Details of the way that the twitterverse and Facebook were manipulated in the Brexit vote ...