With a double red eye to come I decided I needed some exercise and fresh air.  Dawn trips having proved rewarding the previous weekend I resolved to get the first ferry out to Waiheke Island and aim to complete a double headland walk by midday.  Now at this point I must express deep frustration with Aukland's outdoor shops.  Yes I got a great new rucksack etc. etc.  but my attempts to buy a map or guide book provided impossible.  This is meant to be the largest city in the country but none of the city centre shops have guidebooks or detailed maps.   The net result of this was to make me dependent on a trail head guide and some internet searches.  None of those provided miles or kilometres, all gave walking times which is singularly unhelpful.  Has anyone told people here that there are different walking paces?

I made the ferry by the skin of my teeth and gapped a coffee and bottle of water and settled down in the dark as the ferry headed for Waiheke.   Getting off I discovered that at high tide you can't do the first part of the walk so I cut across the headland to Owhanake Bay with the intention of catching the sun rising over rocks and sea.  I decided I could pick up the missing section later.   This provided to be a good idea.  It meant I got some great shots (see header) and also picked up on the Matietie coast with morning light. 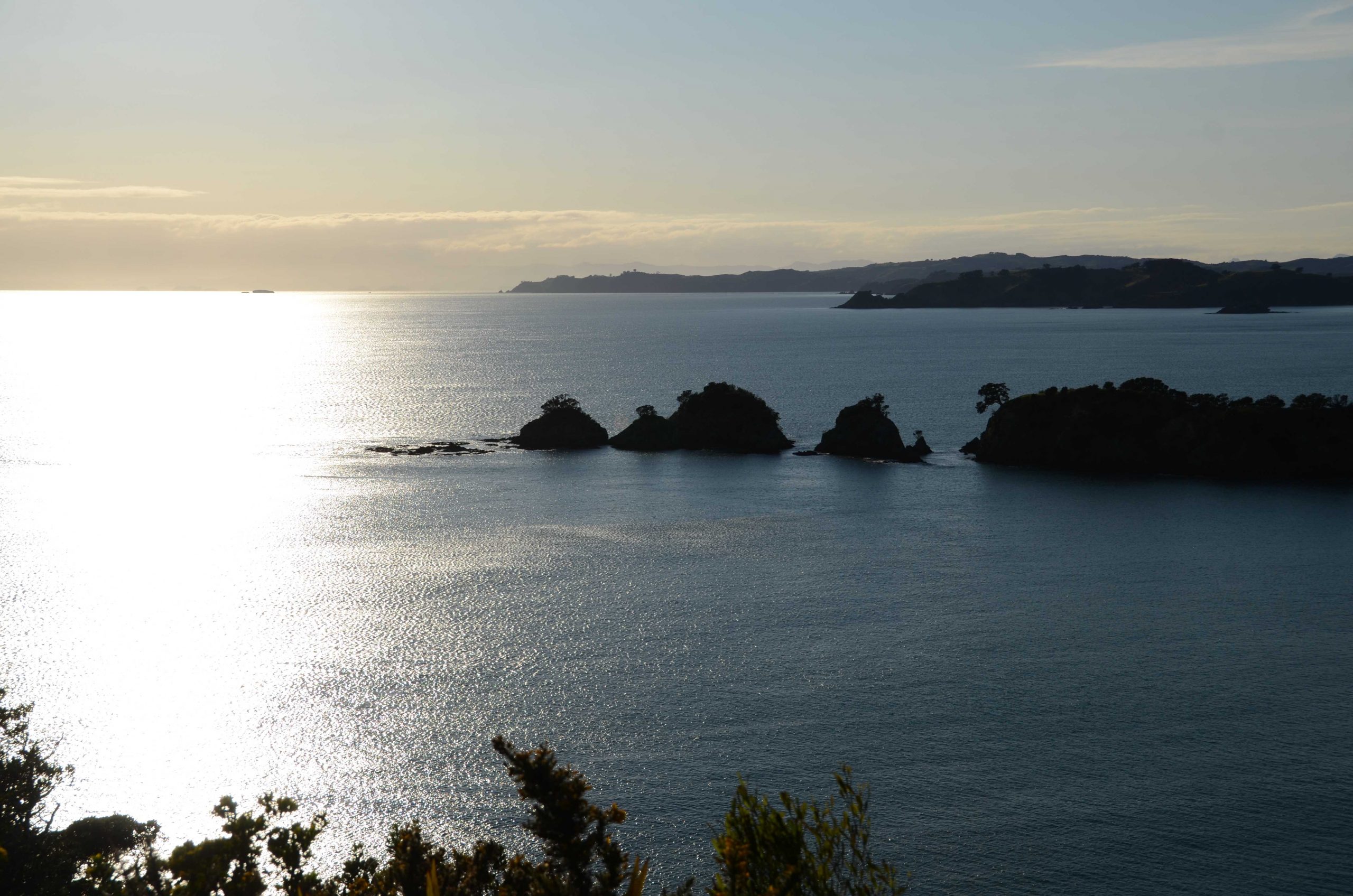 It was a good walk, and I had the whole coast to myself at that time.  Island Bay and Fossil Bay followed in short order and the view over Oneroa Bay (right) was a reward in itself.   From there the walk was a little tedious and poorly signposted.  Too much road walking to be honest and the tide was still to high to risk the beach walk.  That combined with the shall we say primative tourist map meant I missed the turning down to Te Wharau Bay and instead joined the coast again in Matarahui Bay to the east of Park Point. From the there the walk was glorious again, with multiple views to the cone of the volcano on Rangitoto.  Those views were augmented by the magnificent mature trees that are a feature of the coast here.  From there the walk along Cable Bay to Matiatia Bay with a side trip to Whetumatarau Point was the high point of the day.  The only frustration was arriving back at the Ferry Port far too early.  With proper planning I could made this the Greater Te- Huruhi Booundary Walk and completed it in five to six rather than the advertised eight hours.   As it was I had time to complete the first section missed due to the tide.  I can see why the guidebooks recommend this Owhanake Coast Route as the one to do if you have limited time.  You dip in and out of hidden bays n good quality but not over maintained baths.

At one point I realised I had dropped my hat, but I could see it back up in the previous headland (one of the advantages of a telephoto lens).  I made the decision to recover it feeling that I might regret said decision later.  And I did, I missed a ferry by one minute and had to wait around for an hour.  But that itself was fine.  A good day, a new discover, more to explore on a future visit.

So back to Auckland, packing (with that new case given the wine) and the anticipation of a couple of long flights that would allow me to catch up on the email backlog.  One large case, with two other cases slung from it and another on by shoulder and I trundled down to the pier, the airport bus and a last look at the water, and a last chance to breath some of the least polluted air on the planet.

All the New Zealand photographs  are on Flickr.  Unfortunately by GOS unit on the camera finally gave in on the ferry back so some are not yet assigned a location.

I'm enroute home after a business trip that had me in Singapore, Melbourne, and Auckland. ...

The recent Melbourne and Auckland Advanced training sessions have given me a deeper perspective on ...