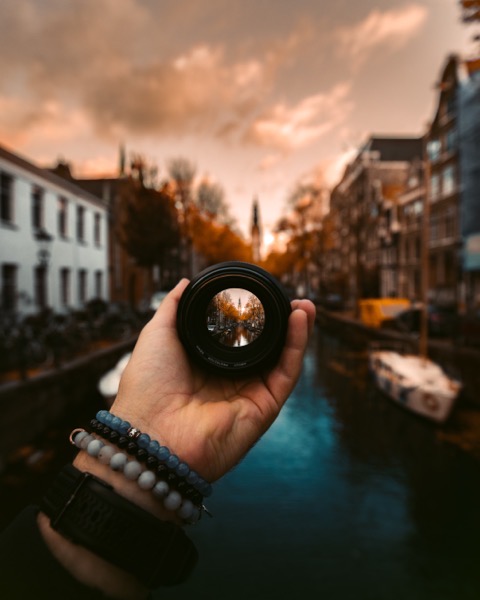 In my earlier post on focus I identified the need to shift from the alpha to the omega points in the Ystwyth curve by going through four stages along with five types of premature convergence.  While I have put a lot of structure in here, it is more a scaffold around which emergence will happen and there is a balancing act between keeping you options open and missing the boat.  The key to managing uncertainty is to break any linear concept and encourage co-evolution or praxis, as they interact with experimental practice.  The issue is to maintain parallelism of the experimental process (this is after all complex) while ensuring the energy cost is containable.  I’ve lived through this a lot over the years when I’ve been juggling several balls to see what will work.  The phrase Can’t you just pick one and focus on it always fills me with dread, in part because it is correct in some contexts while being catastrophic in others.  I’ve often used the parable of the sower to make the point: the seed is cheap, watch to see where it sprouts.  The problem is that a lot of people find juggling difficult.  An element of this is the generalist v specialist thing and if you are generalists you just have to be comfortable with glimpsing the greater depths of a specialist while gaining comfort for being able to see the wider landscape.

Some of this links to the wider question of how sound your knowledge is.  In general, the more you know, or the more you know how to acquire knowledge, the more comfortable you are with ambiguity and the more uncomfortable people around you get!  That discomfort results in one of the premature convergence types I outlined last time.  Last time I said understanding of the granularity and distributed ownership was important here, but to that, I want to add understanding of the process and agreement as to where things are.  One of the major functions of sense-making frameworks, in general, is to provide structure.  Cynefin allows me to say We agreed if it was complex, then we would carry out parallel safe-to-fail experiments rather than having to debate afresh each time.  So one purpose of identifying the four stages is to allow consensus and agreement as to where the matter is, who owns it and who needs to be involved.  I now want to view those stages (and by implication the delta point) through the lens of structure and transparency. 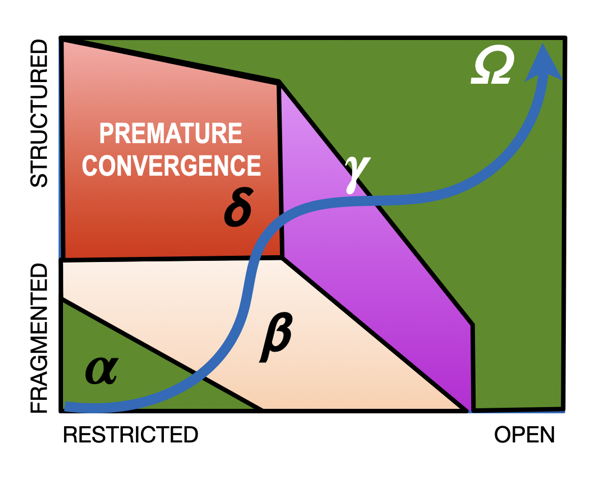 It should be clear, to the discerning reader, that am currently in the beta phase of this particular enterprise.  So consider the diagram to the right an exploratory one!  The vertical dimension is in effect the level of granularity or coherence.  in the early stages, it may just be a glint in the eye of its creator or a conversation with a client that leads to exploration.  The level of abstraction is high so codification and diffusion are difficult and not desirable anyway.  The idea has to mull around for a bit.  Often when you talk to inventors the origin may be a previous failure, by the way, it is after all where most learning happens.  As the idea starts to form you talk about it with more people, maybe build a prototype, or start to talk about it in the context of needs.  More structure is starting to come into play and as you move from alpha to beta this becomes an inflection point and while participation remains tight (only those trusted) the wider pattern is starting to emerge and some key elements will stabilise.  As this happens more and more you need to pause the codification, too few people involved.  So in the gamma stage, you start to test the ideas out, broaden the group while holding the level of structure of codification to the minimum necessary.  Even when you have clearly defined elements you avoid a rigid definition of interactions at all cost.  Historically, from my perspective having built three software businesses over the years, this is where you start to make sales.  A golden heuristic is that if no one is ready to buy it, you ain’t got it right, there are always people prepared to play with a novel idea – not many but a bright light attracts them like months.  The last thing you want is venture capital at this point as it will involve hubris on behave of the inventor – you need the harshness of real projects with real clients badly.

This is also when you are the most in danger of premature convergence.  You are starting to consume resources and that means your activities come under more scrutiny.  The danger is that you will be forced to create a final offering, or someone else internal or external will act before you are ready to.  I’ve shown that as the delta point although you have to see the picture in three dimensions to relate that back to the original Ystwyth curves.  So as you open up, the structure starts to stabilise and then you take off.  If you look at the line there are two periods where you engage more people without increasing codification and two where you keep the base of those involved the same while focusing on codification.

PS: I will be returning to this and the earlier posts – possibly as a booklet or method sheet later this year or early next, and there will be some more blog posts before I get to that point.  Tomorrow I want to move onto diversity and inclusion and how we manage that from an anthropological-complexity perspective.

I’m interrupting the flow of my posts about an anthro-complexity approach to strategy to reference ...

Problems of diversity, inclusion and associated conflict pervade modern society.  To be honest they always ...