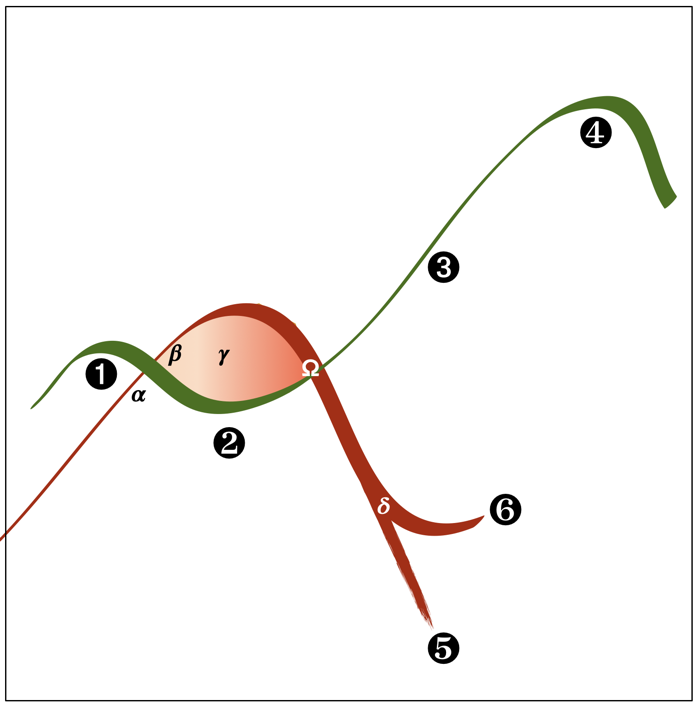 I first used the illustration to the left last November when I was updating the whole Flexuous Curves Framework (FCF). I don’t intend to repeat the material of that earlier post or to be completely consistent with it, but I recommend a quick skim before proceeding.  This used to be known as the Apex Predator Curve but I realised that the Apex idea was just one aspect of a wider re-wilding idea; where I have yet to write part 2 of my initial post last January. This wider concept needs a different name.  It is not finally settled yet, but it has the quality of being both familiar and different; that means you can sense the meaning but not abscond with it to some more common use of language.  Overall this framework is as important to the field of naturalising sense-making as Cynefin and it is also fractal in nature, it can apply to whole markets, individual product/service strategies, or the wider movement of ideas or tropes in society as a whole.  As most people are aware this is the point where the body of my work interacts with that of Wardley Maps and it is both similar and different.  So while it is my theory, it also is a synthesis of the work of Moore and others, all identified in the earlier posts.

In today’s post I want to look at a strategic switch in thinking in the context of a wider market, rather than an individual product, although there is considerable overlap between. This is highly relevant to a lot of work on citizen engagement, rethinking the economy as well as business change. Covid is the sort of radical disruption that means space is emerging for new apex predators as the old are often ill-adapted for a new and uncertain context. That admonition applies to Cognitive Edge as well and you will see changes in how we present and engage.

In this post, I want to focus on the Gamma-Omega move and the changes that are required at that point.  Remember that the Alpha and Beta points are all about ambiguity, early adopters creating something with exciting capabilities.  Here it is important to co-evolve your idea with the market and the pressure of having to sell the idea is a critical part of the overall resilience downstream.  It is why I have argued that venture capital should focus in scaling post Beta, rather than, through funding, removing that evolutionary pressure.  As you enter the Beta point you are increasingly able to codify at a level of abstraction which opens up the possibility of scaling but you are still selling to people who are interesting in how you do things, less than what it will do for them.

The main danger here is homogenisation with the familiar.  I’ve been there many times with something novel but it seems similar to an existing and established approach.  This is especially true at stage 4 on the map where inattentional blindness means that the established way of doing things is difficult to challenge.  Here create boundaries and making distinctions a little more extreme than you would like is key.  I am of course assuming that what you have here is truly different.  Distinctiveness is key both to attract those early buyers and to maintain a level of control over the process of codification and abstraction to allow for later scaling.  The last thing you want at this stage is to appear ordinary or similar and you are going to have to prepared to upset a few people.  Often people will have invested the better part of their lives in a way of thinking and making sense of the world and novelty will always disturb the established order.  Maintaining the balance between challenging orthodoxy and being downright obnoxious is not an easy one to maintain but this is the time to do it.  Indirect approaches which complement existing methods (even though they are likely to replace them) are one proven pathway as is symbiosis, adding the capability to existing practice knowing that ultimately the new thing will replace the old over time.  You have a limited market for novelty so you can afford to keep control, to preserve the purity of what you are doing.

But when you hit the gamma point everything changes.  The overall eco-system is ready for change as the utility of the older idea is coming to an end and it is moving to a decline.  What matters now is the rapid diffusion of the idea and you need to lead but not control.  Boisot’s seminal work with the I-Space pointed to the need for high levels of abstraction and codification to allow diffusion.  So while at the Alpha/Beta point novelty was a competitive advantage, often requiring deep knowledge and experience, you are now at a point where if you don’t codify fast at a level of abstraction that allows for early adoption someone else will do it for you.  Speed is key and (and this is the most difficult) you can’t do this gradually or experimentally, you have to commit.  If you have got the Alpha-Beta work right then people are now looking and paying attention to you, not any direct competitor.  Being attacked is one of the weak signals that you are making people nervous and to a degree, you should be more reasonable.  Accept the value of what has worked in the past, but point out that life changes, and sometimes you move on, ideally in parallel for a period.  A both/and strategy is now called for and if you have done some anticipatory thinking you won’t have closed all avenues to this during the alpha-beta stage of differentiation and boundary control and patrol!

So you switch from containing the connecting, from controlling to being an attractor around which other actors can cluster and imitate.   No market grows if you maintain a monopoly.  This is where open source strategies come into their own, remove the barriers for adoption, but make adoption if your approach as easy as possible so that you lead the development.  This is also where pricing strategies are key.  You are not yet at the point where there are budgets allocated for your approach, your danger is substitution, not competition.  So you can’t dictate terms, especially with partners who can command access to key decision-makers.  Being open, being easy to work with is key and hard bake your purity into your offering through better and more attractive codification.  The metaphor of geese in the banner picture illustrates this point and the way the flock develops and handles leadership is something worth thinking about.

Your strategy is to exit the Omega point with a growth trajectory and to maintain leadership.  Depending on whose work you look at this stage is about 13½% of the total market and who even ends up as the Apex Predator at this point dominates the final and most profitable stages – get to that point and you can start to dictate terms but not before.

I’m conscious this post assumes a lot of prior knowledge and it is also laying down a pattern that I will build on in subsequent posts and also various work we are doing in the wider field of naturalising sense-making and anthro-complexity that I talked about in yesterday’s post.  At the moment, as an organisation we are trying to work out how to eat our own dog food as the saying goes, so watch this space.

I have been very busy with the above-mentioned wiki and other matters so the blog has been neglected.  I will be posting (and retrofitting) the annual Cynefin update shortly and will reference that on social media.  But I don’t want that to inhibit getting some key material out there now

In recent times I’ve been engaged in a series of interesting exchanges with Dr Mike ...

I grew up in and around the hills of North Wales, walking most weekends when ...