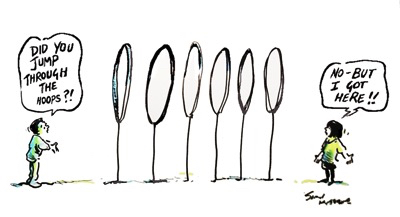 I realise up front that there is a danger that this post may be misinterpreted. So to be clear I see nothing wrong in facilitation per se, I facilitate and I teach other people complex facilitation skills. However I am increasingly concerned – especially in the area of social change and engagement – with what appears to be an emphasis on facilitation as the agent of change with the feelings at the end of the event and/or the commitment to change achieved during that event, as a measure of success. As the deadline implies the Latin adjective facilis meaning easy to do also morphed into the english facile which has a more pejorative meaning. That in term comes from from the Latin verb facere meaning to make, and therein can lie many a tale.

Techniques like participative action research have attracted criticism from anthropologists (such as David Mosse) as privileging those who match the expectation of the facilitator. I’ve sat through sessions where the goal of the workshop was subsumed in enforced participation in the method chosen for facilitation at the cost of the wider objective. I’ve seen people from communities who are inarticulate but understand what needs to be done, de-privileged by more verbally adroit members of that community. Yes dancing for the first time can be liberating, but it can also be chronically embarrassing, especially if you lack the skills and so on (I could have take any other art skill to make this point).

In addition any workshop is an artificial environment. Within that context we can agree to anything, but whether it will translate to sustainable change once the event is over is more questionable. In particular workshops tend to the ideal over the pragmatic to return to my theme of yesterday. So in workshops I am currently planning around citizen engagement in South Wales I am focusing on providing tools and methods to activists in the community, with the outcome not a part of said workshop. I’m looking to move from major events, to triggering capability for micro-change at a local level; to allow for making through a distributed network of identities and individuals with a feedback mechanism. It may be a lot less satisfying for the facilitator, but it should create more sustained capacity.

The cartoon speaks for itself …

One of the many things that has always frustrated me about too many organisational change ...

I’m up working in Bangor at the moment bracketing a weekend which gave me the ...