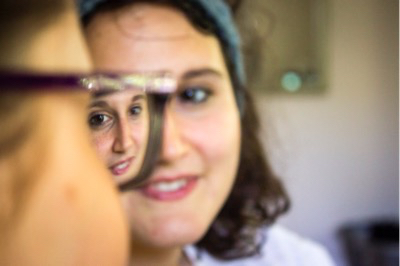 In Act I of A Midsummer Nights Dream Bottom is asked to play Pyramus, “a love that kills himself, most gallant, for love”. Although his preference is to play a tyrant he is willing and states “That will ask some tears in the true performing of it. If I do it, let the audience look to their eyes. I will move storms”. Bottom is a weaver, but now he plays an aristocratic lover and transformed by Puck he will play another role all together. Within the comedy we have a serious ethical consideration of perspective and power and the players see things from many perspectives as the confusions unfold and resolve. My reason for referencing that is that to see something through another’s eye needs to be at the heart of design. But we also need to understand that with perspective comes power, or the absence of power.

Ethnography, on which subject I promised to post today, seeks to systematically study and describe a society from the perspective of that society. To do that would normally require deep emersion in that culture not only as observer but as participant with continuous examination of your own influence and biases. Now there are multiple approaches here including feminist ethnography, confessional ethnography and so on. Critical ethnography seeks to liberate marginalised groups which worries me a little. English history includes of their liberating cultures from a lack of civilisation starting with Edward I suggestion that the Welsh needed to be liberated from uncivilised practices such as allowing women to divorce husbands for cruelty. That idea of liberation was well satirised by Eric Linklater in his 1946 novel Private Angelo, but let us leave that on one side for the moment but I will return to it in the future.

My concern here, in the context of my post on design thinking probably fits within the realist school where you are seeking some degree of objectivity in the study, while acknowledging that the ethnographer cannot divorce themselves from their own history. Just as a side bar here, I am currently reading an excellent work of philosophy by Rovane on the ethics and metaphysics of relativism which has much to say on this subject, so for the moment I want to leave the relativism/realism question in suspension. It is enough to say that we seek to be objective for the purpose of this post.

A significant problem that has emerged over the last two decades is people absconding with the ‘ethnography’ word and applying it to something which is no more than a limited period of observation or semi-structured questioning. I remember one marketing consultant I challenged on his use of the term a decade ago shamelessly saying that he had never even read a book on the subject, but sold more services so he used it. He was not an exception and if anything the problem is increasing. If you spend some weeks interviewing people and observing their practices then you are doing good work, but it is not ethnography. It is more than good enough if you have a specific design issue to resolve, such as providing an improved system for Children’s eye care. But for widespread social change or truly intractable issues with multiple inter-dependencencies it is simply not enough, for that you need true ethnography and several years of immersion.

But, and it is a very big but, you don’t have that time and there are not enough ethnographers. I still remember the first time I really started to gain an insight into how to deal with this. It was when I was still working with IBM and was with Jim’s services research group on the West Coast. They had employed ethnographers and were getting good results and were one of the many people involved in the overall IBM story project. I’m getting pretty fed up of statements that don’t acknowledge all the players involved in that project by the way. The idea that it was just Cynthia, myself and maybe Sharon is plain wrong. We’re getting the UK team together shortly to remember that and there were a good dozen in the US so at some stage I will write that up. I may have catalysed a lot of it, but a broad group was involved and they all deserve acknowledgement.

The way I had the insight was also important. My general approach to problem solving is to pursue the obvious route until it will obviously fail on theoretical grounds – there is no point on wasting further time in practice. At that point you don’t acknowledge failure and just live with it, you look for alternative theory or for a radically new way of doing things, but again consistent with theory. To my mind too many social scientists tried to mitigate the effect of their engagement in the field, rather than rethinking the problem. From that, after I left IBM came the distributed ethnography of SenseMaker® and I will expand on that tomorrow.

I promised yesterday to republish this table which I created some time ago after I ...

Yesterday I expressed concern about the abuse of the term ethnography. In particular when all ...