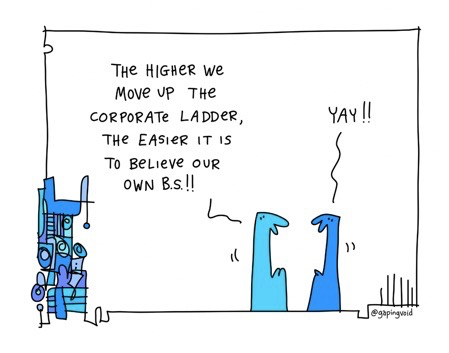 Three blogs using Gaping Void cartoons, but this was too good to ignore and it builds on my leadership post of yesterday. It also allows me to link to one of the three key principles of anthro-complexity (it is growing on me as a name) namely disintermediation; the removal of interpretative levels between the decision maker and the raw data. There are several reasons for this, both positive and negative and the creation of multiple layers of mediation is one of the reasons leaders get into the mode satirised by the cartoon. You see this in politics and business alike and it is important to realise that in the vast majority of cases it is a consequence of a process rather than a moral choice by the individual.

Ascending the ladder of responsibility (and don’t pretend we will get rid of it any time soon) involves increasingly responsibility and higher information processing needs. That means you end up with people who filter that data for you. Unless you are a saint (in which case you are unlikely to be in this position anyway) it will be difficult to prevent those people presenting the data in a form which feeds your preferences. Their power comes from their ability to influence you and they kinda want to please. The more you protest that you want honest opinions the less you will get them, regardless of intent. As you get higher the people filtering data to you themselves have people filtering data to them and you can see how it happens.

Now the better people start to realise this and I’ve been lucky enough over the years to work for people who liked having a few mavericks around them and created top cover. Without that I wouldn’t be here today one different choice around 35 years ago and I would probably be thinking about early retirement from a senior finance role having worked for/with the same person most of my life. When we find people who compliment our skills then they tend to be carried with us into different organisations. Think how many new executives bring people in from their old organisation. I was a very good number two but I decided I wanted something different. But that autobiographic diversion aside, such people are rare.

All of this is made worse by management training, peer pressure and handbooks on how to be a better leader. All of these provide palliatives that require more change in your subordinates that they do in you. You can hear it around the water cooler: OK what is s/he reading? Servant leadership? Anyone read it? OMG how do we have to behave to make them think it’s working? Now that is cynical but it is pretty close to the truth. The S/he has been on a course is a classic early warning signal. We have created an eco-system in which the social impact of target driven regimes is sugar candy coated with the platitudes of popular leadership theory. If the latest trend isn’t working then it’s your employees fault, they haven’t achieved a jade state of enlightenment, sooner or later they will realise you are right and knew what was best for them.

OK rant over, but my point is that it requires exceptional people to escape this type of pattern entrainment and you should not build a theory of the organisation based on a system populated with exceptions, it’sits a contradiction in terms up there with wanting everyone to be above average and other nonsense. Disintermediation techniques are available. We do it with fitness landscapes in SenseMaker®, anonymous virtual dissent, MassSense and other tools. Walking the floor can be cool but is not all it is made up to be. One of the things I have to do is get all of these documented into one place so I am going to do that as part of next batch of training courses.

In yesterday’s post I said that I would look at the role of a leader ...

I’ve had a good week at Bangor University working on the initial programme for CfAC, ...