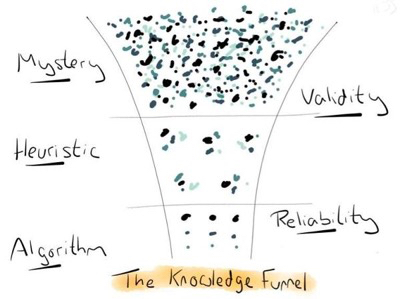 Mary Boone and I spent all day working on our article on Complexity Theory and design thinking. It is the second time we have been together physically and it is getting into its final form. You can do a lot virtually when you are writing together but there is no substitute for talking. The general line we are taking is that the original Martin work is appropriate in the complicated domain of Cynefin and to some extent as a complex to complicated transition method. But it falls down in the complex domain. A parallel point is that it originates in, and is appropriate for, product creation but starts to have problems in a service environment. The points are linked because service is nearly always complex, product complicated.

Note the history of Design Thinking is long, complex and controversial. But in popular form we can see the work of Martin and IDEO as forming a lot of practice, gaining popularity as well as generating concern about industrialisation of what at its core is an artisan capability. If you look at Martin’s knowledge funnel (shown) the idea is that you shift from a form of open ethnography (mystery) that once validated becomes experimental (heuristics) before shifting through reliability (and by implication scalability) to algorithm controlled stability. To be honest most do not do ethnography, more open interviews and limited time span observation which is an irritation but not a major issue.

There is a sniff of Nonaka in this with the knowledge creation spiral in effect being the fall down the funnel. Now I realise I am simplifying here, but I want to make a point to which I will return both here, and in the article. If you are in a product production process then I can buy the model, but if you are dealing with a service (which can include productions) then I am less sure. In effect what Martin calls mystery becomes a semi-permanent condition, the grazing dynamic in Cynefin. Under conditions of stability it will shift to the Heuristic (Complicated) where it can be subject to iterative correction before moving, at the bottom of the funnel to full optimisation.

So the more common forms of design thinking in effect move from complex to complicated to obvious as they go down the funnel. But there are other possibilities, shifting between Mystery and Heuristics is the stable dynamic in Cynefin, staying in Mystery with multiple small stabilisations is the grazing dynamic and so on. So we need to take the funnel, put it on its side, twist it a bit and allow for multiple states. One of the things that became clear to me in our discussions today is that the Martin/IDEO approaches to design have all the strengths of Nonaka’s tacit to explicit linearity, but also all the disadvantages and issues. So we need to recognise the limits, treasure the value, but create something more diverse. More on that soon and I will republish my comparative table between pre-design and design (using Martin’s terms) and post-design or complexity informed design using mine. That will be tomorrow.

Back in May 2011 I got an email from Max Boisot, pictured enthusiastically engaged in ...

I promised yesterday to republish this table which I created some time ago after I ...