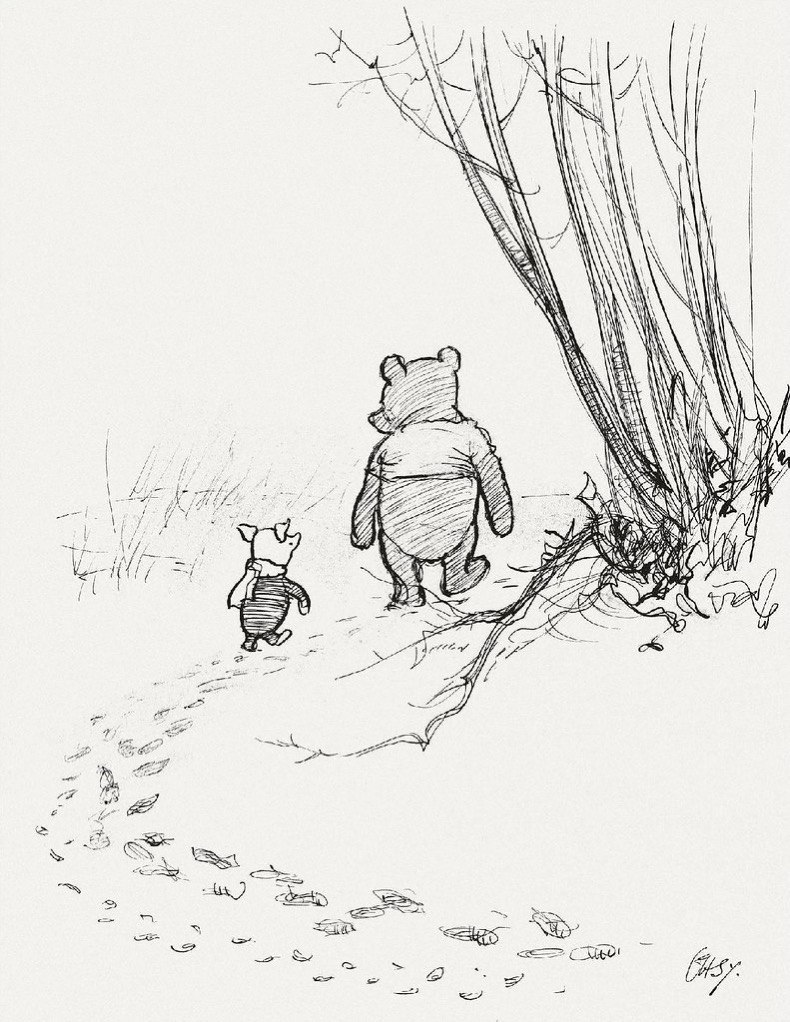 You may be asking what connects the events on stardate 45047.2, the battlefield at Gettysburg (picture from October 2019 on a trip with good friends between conferences), and an illustration from chapter three of Winne the Pooh “In which Pooh and Piglet Go Hunting and Nearly Catch a Woozle”.  Or there again you may not, it really depends what stories you have lived through and therein lies the connection.  For those who don’t know the reference to Darmok and Jalad at Tanagra comes from the fifth series of Star Trek: The Next Generation which is also a reference back to Arena, the eighteenth episode of the original series.  If you haven’t watched it then do, easily one of the best.  We used to use it on training courses and I am thinking about bringing it back when we develop the next generation of narrative programmes.

Basically, the crew of the Enterprise meets an alien race, the Tamarians who speak in metaphors.  So in Tamarian history, Darmok and Jalad were two enemy warriors who were forced to unite on the island of Tanagra when faced with a common threat.  Because a metaphor-based language assumes common knowledge of the story communication is impossible and rising tension is about to result in conflict when the Tamarian captain Dathon says to his officers ‘Darmok and Jalad at Tanagra”  They briefly argue but the captain insists and he and Picard are instantly transported to a nearby planet where they have to work together to slay a beast.  The Tamarian captain dies in the process but the Enterprise is saved from destruction when Picard transport back able to communicate (he has told the Epic of Gilgamesh and that gives him the clue) and the Tamarians gain a new phrase in their language “Picard and Dathon at El-Adrel”.

Not this form of communication is common in English, but the language is not confined to it.  Key phrases from common stories convey highly complex meanings. Coming back to Pooh Are you attempting to debounce Tigger? or, Are you leading an expotition? convey complex meaning and that meaning may have additional levels of significance in family or clans do to use in developing contexts.  So you have found a new home for Owl? has much poignancy in it.  Now if you don’t get any of that you have some reading to do!  You find the same in references to common situations in nations.  Dunkirk in the UK was subordinated to Brexit and so on.  When I was growing up the dominant trope of British Society was that the First World War was a bad idea, emerging from a meaningless and unnecessary escalation of conflict, while the Second World War was necessary for the fight against fascism, freedom, etc.  So with the invasion of Iraq in support of the Americans, you see British politicians fighting to associate their version of events with one or another event.  If you achieve the form we don’t invade, the latter we do.  The same metaphor impacted the event that finally finished the English Empire (my country is still a colony, the first and last so I don’t use British for the Empire) namely Suez.

Strong experiences, recent mistakes can deeply bias decision-makers so this stuff is not just a game it is deadly serious.  Working on Commanders Intent in the US I realised that Gettysburg was a seminal event, its details known by anyone with a military background.  So I combined an event with a counterfactual and said Little Round Top no Chamberlin which references a key skirmish that in popular stories is a turning point in the battle.  Subsequent studies shows that Little Round Top was not Lee’s target but he was trying to suck Union Troops into it on day two to disguise his real target and he came very close to achieving that.  But that doesn’t matter, we work with the story.  Counter factuals allow for the complex exploration of options and a skilled leader will deploy them to great effect.  It’s a very sophisticated way to present options without the inconvenience of factual analysis – you have declared that you are using a form of fiction so you are free to explore possibilities.   The approach is also a substantial tool of rhetoric and can be used for ridicule as well as persuasion.

This is one of the major unexplored areas of corporate communication, and if used in a game environment, of guilt-free learning from failure and also an exploration of novel possibilities.   We will be publishing more of the methods for this in the Wiki over the next month or so and also building them into an approach to facilitation which is all about making it easier to be a chef and avoid following a recipe.   And there I go using a metaphor to make a complex point in simple form …

That aspect of the modern crisis which is bemoaned as a “wave of materialism’ is ...

After a couple of weeks of hiatus (early spring is definitely Bank Holiday season here ...