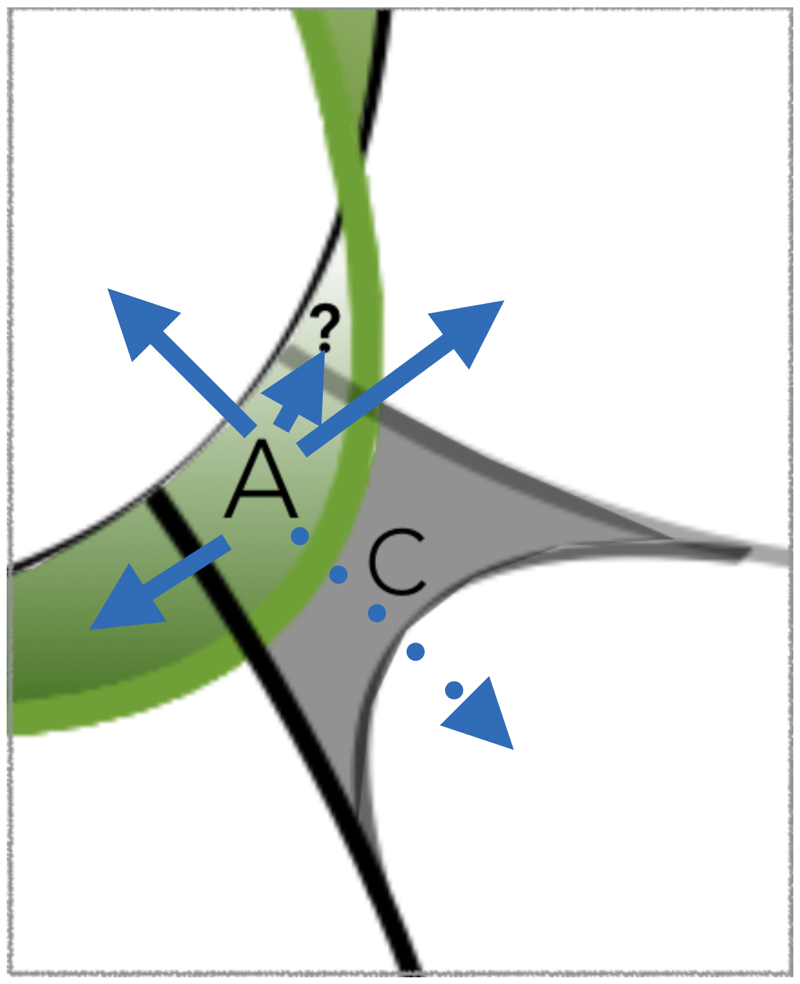 In my first post in this series, I talked about the renaming of the disorder domain into A/C (for short) standing for Aporetic or Confused for what used to be called authentic or inauthentic disorder.  Now before people get hung up on language, if you are presenting Cynefin for the first time then you are unlikely to use the liminal version and you can just call it confused.  If you are using the liminal version then there are several alternatives to Aporetic but I am going to stick with it for the moment.

The point about the fifth (and too much neglected) domain of Cynefin is that it has the idea that confusion can be legitimate or foolish.  Starting knowing you are confused is where aporetic action is required, otherwise, you are just confused.  Hence the aporetic sub-domain is in the general liminal area – it is always a state of transition.

So let’s look at the aporetic subdomain and the creation of aporia.  I first came across the term when I was taught rhetoric around the age of thirteen or fourteen.  Here is was the use of feigned doubt to cast doubt on your opponent: “I am, of course, ignorant on these matters so I can only ask ….” or similar.   Anthony’s ‘”Friends, Romans, countrymen, lend me your ears” speech has several examples.  That use gives us one technique that we can use to challenge someone’s position.  To take an example (if anyone has been following twitter) I have been having a running battle with an engineer who thinks everything has a root cause.  A complex system a priori does not, but simply telling him he is wrong, even with references and evidence doesn’t impact.  A set of ironic aporia based on known failures of this approach might well have worked better.  So that is method family number one, although they will need elaboration.

In philosophy we go back to the etymology of the world and see it as implying a difficulty in making passage (highly appropriate for a liminal zone) in general through a state of puzzlement,   here Socratic questioning, seeking contradictions in a position or the deliberate creation of paradox is a way of forcing people to think differently about the problem.  So that is method family number two, which again will need elaboration.

Then in aesthetics, this is perceived as creativity and we can use cartoons (Gaping Void are brilliant at this) to ask questions that create a space in which people have to think differently.  Improv can do the same as can the use of music and other forms of art.  So that gives us a whole family of methods as our third option and one we will expand on at the Whistler retreat where we are looking at aesthetics and ethics in decision making; details here soon.

Existing methods within Cognitive Edge such as ritual dissent and some of our human-mediated games also work here and the idea is liked to the whole idea of cognitive dissonance, to quote Rescher’s definition  “any cognitive situation in which the threat of inconsistency confronts us”

The overall point here is that in this space we can move out of confusion by the creation of aporia and there are methods that can achieve that which we have or will now develop.  This could make the A/C domain as significant as the others in that it is an entry point into the sense-making process.  To be fair, an idea first suggested by Codefin in the Agile world.  So we start in disorder and then we have various moves that we can make.  Roughly summarised as follows:

Ok that is it for now, in the next post I want to explore the idea of aporia in more depth.

In the past 2 weeks, I have been called into a few urgent conference calls ...

In my prior post in this series, I said I wanted to explore the idea of ...