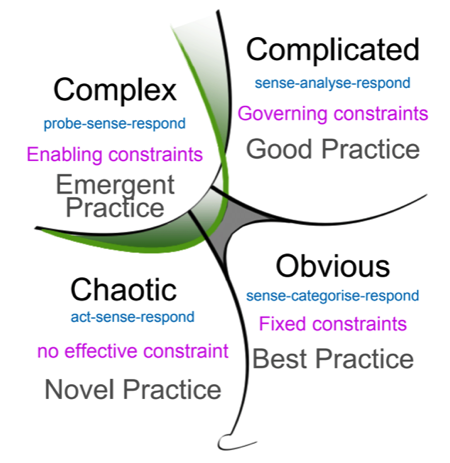 An email came in yesterday from our new CEO Marion asking if I could explain why I had changed simple to obvious within the Cynefin framework, why I called it simple in the first place, had I thought of any other words and did it change anything to do with the dynamics. I was about to reply something along the lines of its all in the history of Cynefin article when I realised I hadn’t checked that in a long time and those questions are not answered. I’ve needed to do an update for some time so lets seize the day. I may make this an annual event by the way as there is always something new as the framework evolves. I’ve also posted on the liminal aspect before but there is no harm in a general update and I’ll also pick up on some other questions about disorder and constraints.

As many people will know the first version of Cynefin in its current form came in Complex Acts of Knowing which is now one of the top ten most cited papers in the Knowledge Management field. In that article I used known and knowable for the ordered domains and complex and chaotic for the unordered ones. That persisted for some time but I was never happy because it confused ontology (the nature of things) with epistemology (how we know things). So I changed it to simple and complicated which conformed more with use by Cilliers and others (but not Stacy who uses the words very differently). The focus of the domain name was on the nature of the system, and the action phrases (probe-sense-respond) referenced how you acted and how you gained knowledge). The philosopher in my was a lot happier now and each domain had its own particular relationship between cause and effect. In the ordered domains there is a known or knowable relationship between cause and effect, the complex domain there probably isn’t one and even if there is we will only know it with the benefit of hindsight and in chaos there is no relationship at all the system is in a sense random. That worked for some time and some of my co-authors remain wedded to it. My recent chapter in the handbook of systems thinking in health care uses simple not obvious as my co-author Prof Mark is pretty much wedded to it.

So why change to the use of obvious? Well, several reasons but the main ones were that ’simple’ doesn’t really describe the relationship between cause and effect and we can in effect be simple in each of the domains. I don’t love ambiguous language so after some thought I came up with obvious, as the relationship between cause and effect is not only known or easily knowable, but it is also self-evident to any reasonable person. In .the complex domain its simple to trigger safe-to-fail experiments around any coherent hypothesis, in chaos, simplicity is about acting to create some type of constraint or patter. In the complicated domain it is a simply matter of delegation to the appropriate expert. As to the dynamics, nothing changes, its just a better name for the domain.

The other common question is the link to the wider typology of constraints I have been working on. I think I’ll make that a separate post and also deal with liminal in another. Open to other questions on the subject and the banner picture is the view over Snowdonia from the northern descent of Y Garn in snow, with crampons. The Glyders of which Y Garn is a part is a key part of my own Cynefin.

Patience is virtue of necessity

Around five years ago I spent a difficult and unplanned night in Toronto airport. I ...

Cognitive Edge, through the Cynefin Centre, is part of an exciting project team funded by ...