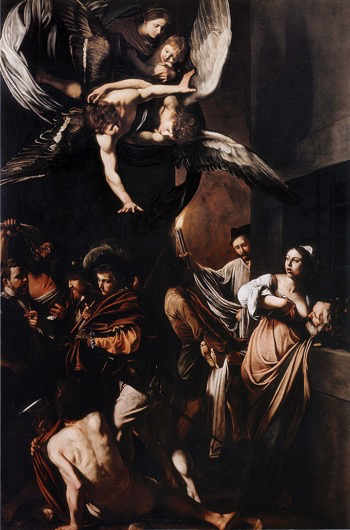 Chiaroscuro is an art term, Italian in origin which refers to light and dark. It originated in an artistic technique that used ink and white paint but the technique touches genius in the work of Caravaggio with whom to be honest I have an obsession, to my mind easily the greatest of painters in the period covering the 16th an 17th Centuries. Dark backgrounds create high contrast allowing the central figure to simply light up the picture. Anyone who checks out my flickr stream will see a lot of pictures taken into the sun for exactly the same reason. The effect is dramatic, it creates contrast and its also a choice to be made in any organisation. Now this is the most abstract of the ideas I am trying to get across in this series and I may not get it right so bear with me. Contrast is key for humans, we don’t manage well when things are bland or there are no clear boundaries. This is something people don’t get in conflict resolution by the way. If you don’t create some boundaries people will create them anyway. I can see a range of reasons for this in evolutionary terms as differences and contrasts allow for discovery. That’s the upside but it also means we emphasise differences unnecessarily.

So when we start to look at organisational change we have choices to make. We’ve got the big picture, we’ve mapped the landscape, now we have to start to think about who we use the light and dark of differences to motivate people to change, or simply to sustain what is valuable in the here and now. Its why in the post I referenced yesterday I pointed to the use of negative stories, a sense of what we don’t want to be, as a better motivator that the idealised stories of goodness that often characterise top down initiatives. But it’s a lot more than that; it’s a matter of what comes into focus and what takes place in the shadows. The light connects what is in sharp focus with the shadows, one does not exist without the other and too many lights, to harsh an exposure and there are now shadows. A key aspect of organisational change (this can link back to scaffolding) is the necessity of focusing on one thing to stimulate responses within the wider eco-system. The reality of any organisation is that people talk, their interact, they live both within and outside of the prescriptions of management. Informal communities in IBM (my first major Cynefin article referenced earlier in this series) had a 64:1 ration with formal ones. Much of the richness of the formal arose from the informal through stimulation, work arounds and downright opposition. Sensible managers allowed that.

Where you shine the light, and where you choose not to shine it, are key management decisions. With the right narrative based culture maps you can help make the right decision, and also get the sort of real time feedback and anticipatory triggers that are needed to handle the inherent uncertainty of cultural change.

While having specific goals is not possible in a complex system, and any cultural change ...

The big issues are now behind us in this series and the final three posts ...