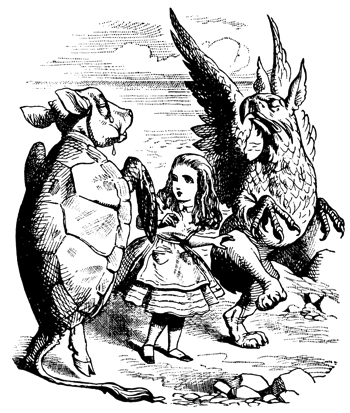 Yesterday’s post had a somewhat ambiguous title and illustration and I’m going to continue that today. Discovery often involves enigma and paradox! I’m continuing the Alice in Wonderland theme as well. The Mock Turtle and the Griffin are the first characters in Alice with who she can have any real sympathy. In chapter 9 where we first encounter them the Mock Turtle explains that “He studied a variety of unusual subjects, including Reeling and Writing, as well as Ambition, Distraction, Uglification, and Derision.” Lessons, lessen so they become shorter every day but he avoids the logic that this would be they would dwindle to nothing by allowing his companion to change the subject. Importantly for this post the Mock Turtle is so sentimental that he becomes unbelievable, untrustworthy (my interpretation here).

In chapter 10 our interlocutor (which is how I see Alice) is asked to recount her adventures, ideally without explanation as explanation is boring. She says:

“I could tell you my adventures–beginning from this morning,’ said Alice a little timidly: ‘but it’s no use going back to yesterday, because I was a different person then”

Yesterday readers will remember she chose to go down the rabbit hole, he life undergoes what (as I pursue the metaphor relentless) we would call a phase shift. This brings me to the idea of single and double loop learning made famous by Agryris in his 1991 HBR article Teaching smart people how to learn where he uses the metaphor of a thermostat. Single loop learning is to continue to try and adjust the temperature by responding to the thermostat, double loop learning would question if the temperature was right or necessary, thus moving outside the existing mental model of decision making. I am not unique in thinking that the idea was expressed at least as well, and in a wider context, in Cyert & March’s 1963 book, A Behavioural Theory of the Firm but I just note that for the record. The switch between the two is assumed as something that we can choose to do, or be trained to do, or directed to do. The underlying assumption of intentionality is (as I suggested yesterday) purposeful in nature. Not the same type of intentionality as Alice by the way, she has no idea of outcome or purpose. Nor is it a phase shift in the sense I mean it; in Cynefin terms (like all mental model type methods and theory) it is a deliberate shift within the complicated domain rather than (as it was for Alice) a shift to the complex.

Now this gives a different perspective on my discussion yesterday of an approach based on What do I do tomorrow to create more observations like these, fewer like those using distributed ethnography as the source data: fragmented and distributed thus allowing the disintermediation of the intervention technique. In this approach we (more like Alice) encounter opportunities through experimentation. That can mean exaptive moments in which we repurpose our or other people’s capability for novel needs of our own which may not be understood in advance. The theory here is different, although the practices are in many cases similar: I learnt a lot rom Chris Agryris and his various co-authors over the years. But I come back to my theme of yesterday, we are interacting with a pattern of observations now, rather than an idealistic future state.

To evaluate or describe?

Yesterday I referenced Max’s reminder to me of a conversation we had in which one ...

I intended to complete these three posts linking ideas from Alice in Wonderland with the ...