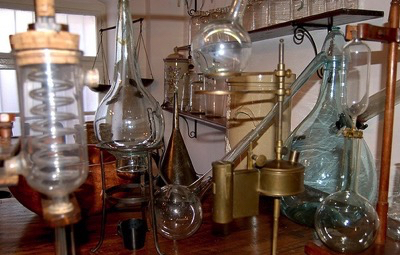 I landed in Melbourne after two long flights but with the satisfaction of an email in box reduced to 40 from a 400+ backlog when I boarded in Heathrow. Settled into the Hilton I picked up and accepted an invitation to be part of discussion, chaired by Jabe Bloom, with Simon Wardley. This event will take place on Thursday 6th October at AgileScotland. I’m looking forward to that as there are some interesting links between Wardley Maps and Cynefin. I’m also looking forward to resolving some of the issues from Simon’s somewhat disingenuous use of the pseudo-science label for Cynefin; acknowledging that you know a word is used pejoratively but claiming that was not your intent when challenged is disingenuous from my perspective. I’ve linked to his post so you can read the context. I also suggest reading my original post which triggered his reaction as suspect he thought I was applying the pseudo-science label more broadly than I intended.

Whatever, I realised that I had promised a blog post on the whole issue of what is scientific in the general field of sense-making. Simon seemed to take a rather restricted view of the meaning of predictability in determine what is or is not science and also seemed to be determining that anything which did not meet that criteria could be labeled as pseudo-science. Now I think it is a lot more nuanced that he post implies, but I acknowledge I haven’t really set out my thinking here. This is also a preliminary post on the subject. I’ve been influenced by both Thagard and Popper in this and I don’t really have the time to write an essay on the Philosophy of Science. But I do think there are some important points to be made.

So on the plane I started to sketch out a way of thinking about the role of science in the general field of sense-making and methods – which is the context of Simon’s original comments. So here it is, but assume it is going to change over time, so it should be seen as stake in the ground at the start of a journey rather than a definitive statement. 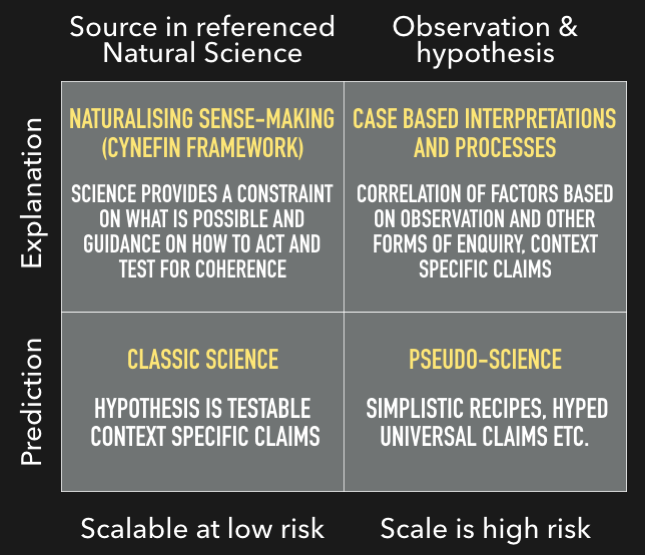 I should start this by reference to the naturalising tradition in philosophy which argues that philosophy should be based in (I would say constrained by) natural science. I firmly place myself in that tradition and the school of sense-making with which I and people like Gary Klein are associated builds on that – hence my use of naturalising sense-making to distinguish my work from the sense making of Weik and others; the hyphen is also significant by the way.

Now I describe the purpose of sense-making as How do we make sense of the world in order that we can act in it. With that comes a key consideration of sufficiency. I move on from that to argue that we should first distinguish what are the constraints that can be applied from verifiable insight into the natural sciences, then within those constraints look for what has the lowest energy gradient. Borrowing from Constructor Theory on Physics I argue that the probability is that will happen and change is all about changing the energy gradient/potential of the system. All of this fits with the inherent uncertainty which is a part of the science (and the clear science) of complex adaptive systems theory.

In contrast the dominant approach in management science is to derive hypotheses from observations or cases and then seek to generalise the results in frameworks. models and practices. That was not the method used to create Cynefin which was derived from theory applied in practice, modified in practice but constrained by theory. Wardley maps would be an example of this, but not in the full sense of a popular book based on rigorous research such as Good to Great or the like. One of the dangers of this approach is that it is very dependent on an understanding of the context from which the originating cases were derived and the larger the claims for determinacy the higher the risk.

As you can see in the two by two above I have distinguished explanatory claims from predictive claims. In my responses to Simon on twitter I pointed out that the nature of the claim determines the use of the pseudo-science word. But I have also realised that the naturalising tradition (and also Thagard) have created a new category of material which is coherent with science, but does not make the claim to be pure science. When such a claim is made without the rigour of fallibility and the ability for other researchers to replicate the experiments; then we have pseudo-science.

So Cynefin is top left in this, Wardley maps I suspect top right. NLP, Spiral Dynamics bottom right. But that is just to start. Tomorrow I will pick this up and expand it, and also deal with some of the specific aspects of Simon’s original post.

Over the last couple of weeks I’ve been thinking a lot about constraints in the ...

A long time ago I settling into a new strategic role within DataScience following the ...