Wikipedia defines a buzzword as “a word that has begun to be used in the wider society outside of its original context by non-specialists who use the term vaguely or imprecisely. Labeling a term a “buzzword” often pejoratively implies that it is now used pretentiously and inappropriately by individuals with little understanding of its actual meaning who are most interested in impressing others by making their discourse sound more esoteric, obscure, and technical than it otherwise would be.”

Innovation is the latest and greatest buzzword in business and Government, (henceforth to be known only as the “i” word in this forum.)

It seems that everyone is now talking-up the “i” word which is not a bad thing I guess, however it all tends to stop at the talking. A while back, the phrase the “bureaucratisation of Innovation” popped into my head (%*#@ I said it!) I’m not sure whether I dreamed it up myself or unconsciously plagiarised it, if it’s the latter … sorry!

I’ve known few words during my previous life in the public sector that have invoked such consternation, misunderstanding and outright fear. When we speak of the “i” word, we speak in glowing terms of the potential it offers but secretly fear the change it might engender. As a result we leave it at the talking and hope the troops will be suitably impressed with the “i” vision we have carefully crafted.

In those instances where the speaker genuinely believes in being innovative, subsequent actions often tend to be anything but. I liken this to instances when we have asked people to design complex probes for intractable issues and end up with a set of interventions, business plans and communications strategies that would do any bureaucrat proud. It seems that with the will to design a new way and experiment, most do actually manage to get one foot into the complex domain but tend to leave the other firmly planted in the complicated.

We’ve all heard bureaucrats in government spruik the “i” word and tell us that we need to think differently and that we need to be challenged, however when the challenges do come we routinely default to the linear and structured approaches of the past. Did I say the past? They remain very much the processes of the present too. When this occurs and new and creative approaches to new challenges are shunned, the “i” word becomes little more than a buzzword.

The use of the “i” word in many cases amounts to little more than a form of ‘bureaucratic chicanery’ in which words and talking about action, substitute for action itself. In Australia, our now deposed Prime Minister’s not so recent 2020 summit proved a nice example of the bureaucratisation of the “i” word.

1000’s were flown in to the Nation’s capital at great expense to divest themselves of those new ideas that would change the world. Sadly the ‘creativity’ component of the summit was populated with ‘artistic creativity’ types resulting in an all too predictable lack of hard, value-add ideas. Suffice to say, few, if any, of the many of the thousands of ideas generated at the summit have been appropriately harvested or moved to meaningful action, but wow, was the event talked up!

When you can look under desks in organisations and see rolls of butcher paper containing post-it-notes (and hexis, heaven forbid!) of ideas and concepts gathering dust, you know that the “i” word is a buzzword.

If we can put the “i word” into enough speeches, documents, ppt presentations, glossy brochures and action plans though, we must then be doing the “i” word. Right?

In environments where everything is first viewed through a lens of risk, as opposed to a lens with a balanced assessment including benefit and feasibility, it is extremely difficult to gain the permission required to undertake the thinking, experimenting, probing and prototyping needed for the “i” word to happen.

So, while our hospital waiting lists get longer, the health system implodes, the abuse of children in our care increases, assaults on our streets increase and Rome continues to burn, our bureaucrats continue to talk innovation (%*#@, I said it again.) 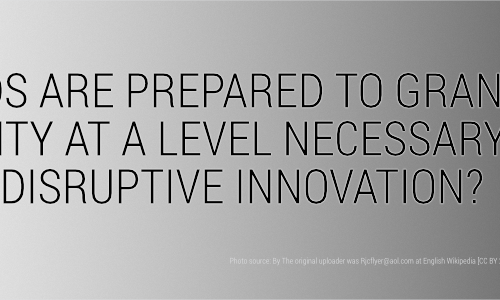 Live with it, don’t pretend you can avoid it

Dilbert is always interesting, but every now and then we get a strip which is ...

The news today that Germany is to abolish Military conscription triggered a memory or two ...