After sitting in front of a computer for the best part of twelve hours a day for over a week it was a real pleasure to get out for the latest section of the Thames walk today. We had made it to Benson Lock on the last section and were prevented from making our target of Wallingford by the closure of the lock. Given a long road diversion was in place we had decided to start from Wallingford next time and fill in the gap. Over the week before my obsessive nature got to me and I ended up getting up very early, leaving the car at Tilehurst station and then using a combination of train and bus to get me to Wallingford bef sunrise. A torch assisted walk got me out to Benson Lock as the sun came up and I met the rest of the party in Wallingford some time later. I simply couldn't cope with leaving a gap in what is meant to be a continuous walk, and I even walked upstream of the lock to the old ferry landing point to compensate for not being able to walk across the lock itself. The full set of photographs for this section are up on flickr.

For anyone interested, next Saturday we plan the section from Pangbourne to Shiplake which takes us past the half way mark on the trip. Others are already planning to join that section so if anyone fancies it let me know let me know. It will probably involve lunch at a Thameside pub. The section is around 13 miles and there is an easy train route that returns us to the origin via Reading. 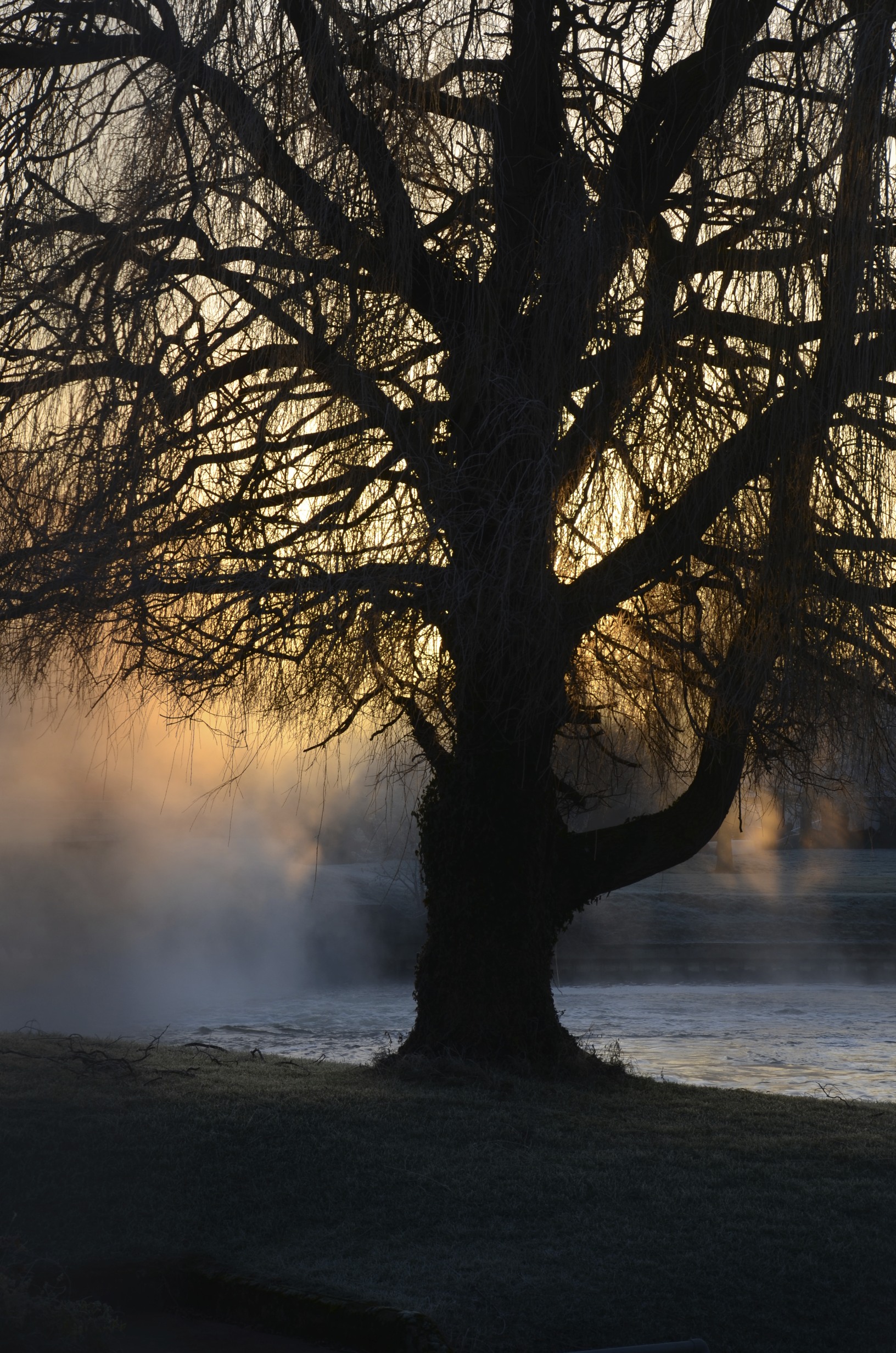 The early start gave considerable reward in lighting conditions but it was bitterly cold, around minus five centigrade. As I passed Wallingford castle on my way out the sun was just starting to appear above the trees and created a spectacular effect with criss crossing com trails in the early morning sky. Frost was everywhere enhancing the beauty of the scene. At the lock itself the water vapour from the weir with the sun and a convenient tree produced the shot to the right. That was achieved by pressing the camera lens up to the gap in a security fence. I should say that there was no need of that, or to close the lock. There were already scaffolding and plank bridges that could have been made available to the public at least at the weekend. I suspect an overzealous health and safety culture is to blame for that. I'd argue the risk of the road walk was higher than falling into the river, but then of course that would be some other organisations liability. 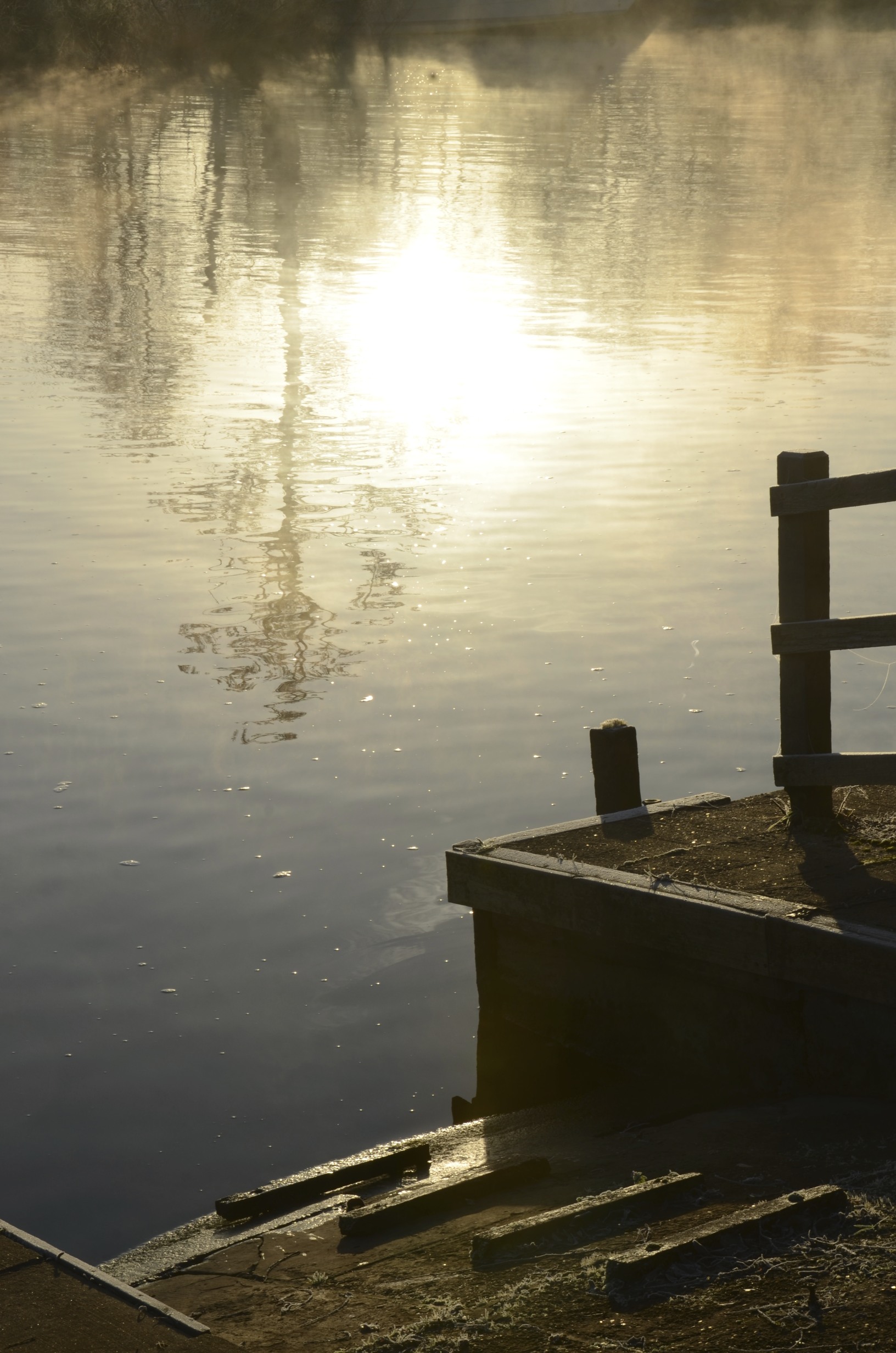 I walked upstream of the lock to the old ferry crossing point to salve my conscience having not walked across the lock itself (yes I can be that bad) and then set off downstream meeting Julia and Peter before getting to Wallingford proper. They had arrived by bus from Oxford the best part of an hour later. From thence the path took us down the increasingly tamed Thames. The Wallingford rowing club provided the odd noisy intrusion as did a number of early morning dog walkers but mostly we had it to ourselves. Peter and I had a ferocious argument about IQ tests and Julia pointed out Anglo-Saxon brick walk. As you undertake a project like this you settle into a comfortable familiarity of conversation. There were the odd spectacular example of modern architecture, a wonderfully peaceful scene with a swan (pictured up front) and continued great light effects and cameo pieces (see left). As the sun rose so did the temperature and began to regret some of my clothing choices for the day. The sun was in our eyes and it was difficult to see at times. Walking backwards might have improved things but the prospect of an unwanted dip in the freezing river prevented any such rash action. We stopped near the lock at Goring for a quick lunch. The “gap” at Goring and Streatley is an ancient site on the route from London to Oxford and now combines road, rail and river. It also marks the crossing point with the Ridgeway which is also on my target to walk this year. It passes from Ivenhoe to Avebury and I may contract one of the many services that book accommodation and transport luggage on Britian's long distance paths. At least for the first three days, the remainder I can do on public transport from home.

The path diverts from the Thames bank shortly after Goring, climbing up into the beech woods but maintaining views of the river for the majority of the path. This was a welcome piece of variety and also provided shade from the sun which was still low in the sky. Picture to the right on the early stages. The only downside was a near vertical section that one does not expect on a river bank walk. A notice at the top apologies and advised that alternatives were being sought. From there it was a simple descent to Pangbourne and we decided to stop there heading to the Cross Keys for a few drinks, thanks to the Good Pub Guide app for that one.

The day was completed by watching the Blues beat London Irish to top their Heineken Cup Pool. Given the proximity of the stadium to the end of the walk this worked well. I had sent Huw back to University the previous weekend with a spare car key. He came down for the match and it was thus possible to text a “Pick me up from the Cross Keys” message after he had collected the car from the station car park. A got a rather sarcastic response about old people and drink, but not to worry. I enjoyed the match, but every bone in my body wanted to go home for a hot bath.

Every child is an artist. The problem ….

I realised today that an awful lot of the best (or at least the classic) ...

I've spent most of the day sat at a computer, aside from a bath, ...