Well you didn't expect me not to mention it did you?  Yesterday I went down to Cardiff to witness the third Grand Slam for Wales in eight years.  Not yet equalling the performances of Wales in the 70's as the performance between those highs has left something to be desired, but showing the potential to greatly exceed it given the age of the team and the professionalism.  We may finally have learnt to be pragmatic about winning rather than being romantic about the manner of our losses.

For the first time in those eight years I went with my daughter rather than my son.   Huw is on some Spanish island with a group of people who consider bouncing on canvass stretched across a metal frame as a sport and thus missed the event.  So daughter donned one of my 1980's rugby shirts (she wore it as a dress not a shirt to my chagrin) and we had a Italian meal together on Cardiff Bay, bought a painting in the artists co-operative there then soaked up the atmosphere before moving into the stadium for the match.  The picture of us during the match is courtesy of SWALEC who took a panoramic high quality picture of the whole crowd. 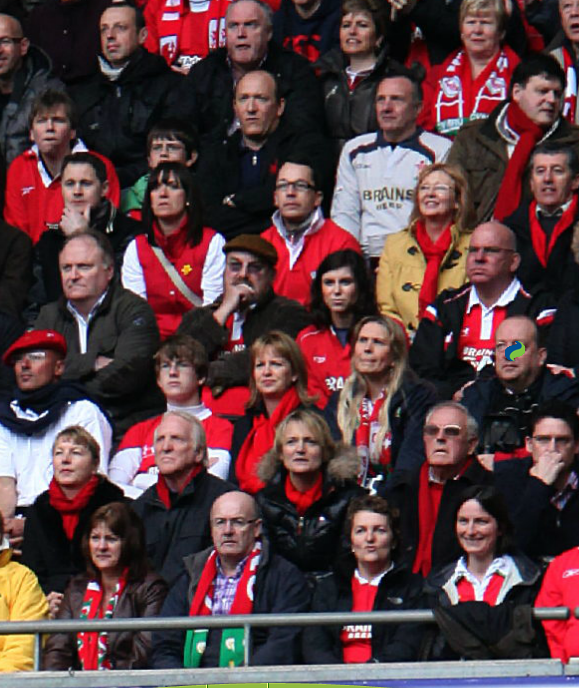 The one real disappointments on the day itself was the interruption of the minutes silence at the start by two total idiots and the failure of the Irish pack to turn up in the second place match which followed.  The main event that it was a brutal match, transformed by one breakthrough try by Alex Cuthbert (pictured).  That was made possible by one of many brilliant tackles by the outstanding number 6 of this generation Dan Lydiate, a wonderful clear out by Wyn-Jones and the insight of Priestland to release this season's discovery to evade three french defenders and score.   It was not a surprise to those of us who have watched him emerge at Cardiff this season.  A candidate for player of the tournament he is currently on a £5K a year development contract supplemented by £14K for being in the Seven's squad.   His bonus for winning the Grand Slam is £95K and he plans to pay off his student loan, but keep his battered and much mocked Renault Clio to remind him of where he has come from, something that says a lot about the man.

The final five minutes and as a crowd we helped, standing and singing Hymns and Arias while the victory was secured.  If you don't know that song then listen to this recording from the first Grand Slam of this era when we defeated the Irish in the last game of the season.  Everyone stayed around for the celebration and finally we got of the Stadium to find a pub for a drink before returning home to watch the whole thing again!

There is something special about “being there”, and I suspect there may be some daughter-son rivalry over the second ticket in the future.

Of the spear tackle

I'm pleased to announce that we are running the first advanced course for Cognitive Edge ...

The feather original evolved for regulation of temperature, but then evolved for flight.  In 1942 ...