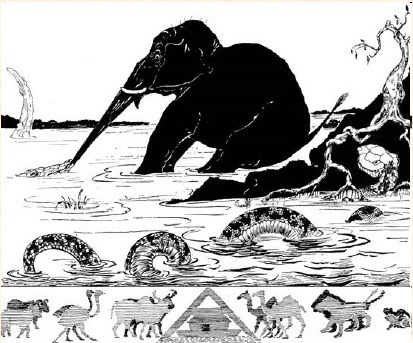 … which the Elephant’s Child in Kipling’s Just So Stores had in abundance. I’ve previously mentioned in my 2012 Christmas Series on Children’s books and another on dedicated scholarship. The great grey-green, greasy Limpopo river, all set about with fever-trees is one of those phrases which stay with you forever if you read them when young, or my my generation had the privilege of hearing them read by the incomparable David Davies on Children’s Hour back in the sixties. For those who don’t know the story the full text can be found here, but I recommend the book itself for all ages. I even managed to distract my own daughter from her nightly demand to have Ruby and the Dragon read yet again with it on a few occasions. Looking for a link I discover I may have been perpetuating racial stereotypes by reading it to her! Each generation has it own books but some have timeless lessons and the Just so Stories are an exemplar of that. The research side of this is depressing however. I get a couple of papers a week to review for the various journals where I sit on the editorial panel. I reject about 90% which is a little depressing and I am convinced that editors send me material they don’t like knowing I have little tolerance for material that is over narrow, poorly references and above all which shows no curiosity. What seems to matter to people these days is not contributing to the field, but achieving a publication target. A consequence of the measurement systems which create so much poverty of thought in academic life. In order to get another paper out the field of study is narrowly constrained to a single hypothesis. An inadequate questionnaire is produced which gets a poor response rate. That is then crunched through various statistical software and a set of conclusions are drawn. The better authors know it is a nonsense and add enough qualifications to any conclusions to render the paper useless but allow them a get out. The worse drawing sweeping conclusions that cannot be supported. Like (to take a recent case) drawing sweeping conclusions about different work cultures between two asian countries on the basis of a 50 person response survey in two high tech companies.

In another case (and I protect an innocent source here by not being too specific) a government commissioned research study which so narrowly constrained the field of book/paper research so as to make the desired conclusion inevitable. As someone quipped, its no longer about evidence based policy, but policy based evidence. You see the same in management literature in the selection of aspects of partially reported cases to support a thesis or recipe that the author wishes to promulgate. Retrospective coherence based on partial (in both sense of the word) evidence is a disease in the consultancy and academic management fields at the moment.

Then look at the PhD level work in the humanities. It used to be that if you had an original idea you could turn up and defend a thesis. Now you have to go through a long and tedious education process including pattern entraining you into a type of research. Originality and curiosity are sacrificed on the alter of process and predictability. A problem is that many students seem to like this and when you hit them at a viva (I love doing these) with something related to the field but not directly linked they look at you in an offended way. Many of them also take offence when you make the assumption they have read the books and papers they reference. I’ve caught a few over the years that way. If they had any curiosity they would have read the material.

We need to create systems that encourage curiosity and exploration. Reading something that takes you somewhere else on an apparently entangled pathway is just how change discoveries are made. We need passion not process and curiosity not conformity.

In the course of writing my Christmas series I came up with a throw away ...

and then to context

For those who were emotionally deprived in childhood by not being read the Pooh stories ...