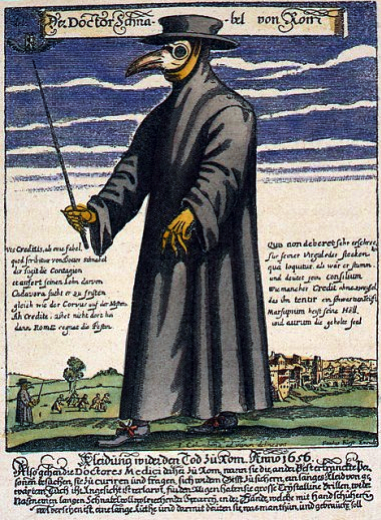 The picture is of a doctor wearing a plague mask. The mask is to protect him from the night air, or miasma, which was thought to be the way the disease spread. The somewhat elaborate protection might have caused enough distraction for him not to notice the myriad flea bites which were the real vector. Miasma theory held that disease was spread by bad smell and as such had utility while being wrong. It got people to clear up decomposing mounds of food and such like. Florence Nightingale was a proponent of the theory and it didn’t really die out until the turn of the last Century. The bad smell was actually an indicator of something wrong, but it was not a vector for disease; nor would using a mask or hiding the smell with a posy prevent infection. The belief did drive various movements for sanitary improvements and so on so its partial utility needs to be acknowledged, as for many false beliefs!

So how does this all link to my series on shifting from Agile to agility using the Alice illustrations as a theme? Well, within the Agile community the phrase mindset (I refuse to capitalise it) has taken on many of the mystical efficacious qualities previously claimed for mental models and the long standing pervasive excuse of blaming things on culture. It is a modern day miasma where people assemble the usual and common platitudes under its banner, while ignoring the multiple small actions, or inactions that contradict the claim. It is an example of the confusion of symptoms with causes and such confusions are all to common. I first commented on it a few decades ago when people started to argue that creativity programmes would engender innovation. I pointed out then that innovation and creativity were both the product, or rather emergent property of some mixture of starvation, pressure and perspective shift. Said combination breaking up pattern entrained thinking and allowing novelty to emerge. Creativity didn’t cause innovation it was a property of the conditions that resulted in innovative practices and flashes of insight. Because the two were observed together people assumed that training people to be creative would somehow or other magically create novelty. And of course, it is also a lot cheaper to send people on a two day course that address longer term issues such as excessive process based control and over detailed monitoring; one of the many inhibitors of innovative thinking.

The same is true of mindset, culture and so on. They are emergent properties, arising in unpredictable ways from multiple small, and to a lesser extent large, sins of omission and commission in the day to day practice of management. I’ve seen Agile people dismiss wisdom in older people simply because they did’t use the language of the modern day, or had concerns for underlying architectural issues not susceptible to the high user interactivity and short life cycles of a two week sprint. I’ve seen wonderful statements about promoting and valuing the role of women on professional organisations, while in practice nothing changes and women of all ages suffer day to day harassment and lack of opportunities.

Actions always speak louder than words and leaders need to be paranoid about making sure that their individual and collective behaviour avoids been judged as hypocritical against the idealist set of values, competence descriptions and the like that they previously propagated. Leaders also need to realise that the direct feedback they get when they ask about theses matters can’t be trusted. They are in a position of power and that constrains what they are told. It doesn’t matter what they intend or need; the reality of power is that it is a filter and it takes an exceptional leader to overcome it or find the time to listen more deeply when their own needs or beliefs are impacted by the response. We only see what we expect to see to reference inattentional blindness. Wisdom lies in making sure alternative feedback mechanisms are in place in anticipation of need rather than in response to an issue. In effect to sense the attitudinal pattern of the water cooler stories.

Of course once you make something ‘official’ even the most minor transgression will result in the water cooler train of destructive narrative getting out of hand very quickly; what I called an anti-story back in the early days of establishing a corpus of narrative theory and practice. We hate hypocrisy almost as much as we (sic) practice it; always seeking the mote in the eyes of others while ignoring the logs in our own eyes. It may not be fair, it may not be reasonable but it is the nature of humans. Not only that, the higher you are in the chain of command the more the merest spec of dust will be magnified to tree like status. This is made worse if you make claims to be different, to be a servant leader or whatever. Best not to describe what you think you want to be (or worst still what you think you are) but to let your day to day micro-interactions with people to do the talking. I always find some irony in the method wars that surround Agile and the emphasis on tools. Something that is been carried over into the wider application of agility beyond the IT department. The original Agile manifesto has the following core value: Individuals and Interactions Over Processes and Tools. In too much practice that statement is reversed. But I understand why. Following a process, using a familiar tool gives the false comfort of control, itself a miasma of the modern day with the engineering metaphors that underpin management training. In Cynefin terms: keep that for the ordered domains, but even there allow exceptions; in the complex domain it just won’t work and the more you are an advocate for a particular tool or approach the less likely you are to be told of its unintended consequences or hear the stories of its negative impact.

So if you want an agile mindset, practice agility and avoid any action, however small, which would allow an accusation of hypocrisy to trigger a counter story. If you have to explain yourself you got it wrong a long time ago. You can’t design or create something which is, by its nature, a emergent property of complex interactions over time. You can nurture it, you can nudge things along, you can (if you are using SenseMaker®) ask for more stories like these, fewer stories like those. An approach which will engage people more than talking in abstractions. All of these may result in the evolution of something that could be called a mindset – you will know when you have it, but you will almost certainly be hazy on how you got there and no amount of retrospective coherence will allow you to replicate the result in a different context. On the other hand if you really don’t care and just want an “Agile Mindset” read a few articles, spout a few cliches and move jobs every year or so, launching a major new initiative at the start of each job switch that you don’t see through. That behaviour drives much of the rigidity of consultancy implemented methods, launched with fanfares based on some formulaic understanding of how things should be.

A final metaphor; eliminate the wild flowers in your garden and you destroy variety and kill off resilient capacity. You can have the neat borders, the carefully trimmed lawns but all of that relies on the weeds. Learn to live with dissent and with a lot of mess. The higher you get, the more challenges you face, the less you will be able to impose order, so learn to live with its absence as early as possible in your career. The bigger the challenges you face, the more your own life and actions will fall away from the ‘ideal’ as you work with events in the tails of distributions not in their centre. It is that reality that makes you vulnerable to multiple small pervasive anecdotes of hypocrisy that you may never hear. Your actions are context specific, your ideals are context free and therein lies much of the problem.

I could get biblical here in this emphasis on doing small things rather than talking about big things, and astute readers will know I have already referenced Matthew 7:5. I will confine myself to two more to make the point: Matthew 7:20 Wherefore by their fruits ye shall know them and James 2:24 You see that a man is justified by works and not by faith alone. Acting in the present, consistent with a narrative direction can produce sustainable, resilient culture change and thus the right mindset – but is evolutionary and can’t be engineered, it is aided by the unstated but understood trivia of day to day life, it is hindered by explicit aspirational statements. The Agile movement is being infected by the wider management disease of offering the ideal through a cycle of failures in which the initial investment by the client prevents acknowledgement of said failure. From time to time at a conference I ask how many people have been through a change initiative in the last two years and most people put up their hands. When I ask how many have ever gone three years in any organisation without one and the hands stay down. Isn’t time we found a better way?

PS: As with all this series you can work out the Alice references for yourselves

PPS: Don’t even get me onto mental models – one of too many attempts to fit human intelligence and motivation into a computer metaphor.

One of my better ideas last year was to put together the first Cynefin Centre ...

I’ve got a lot more posts lined up in the Alice series, but I’m going ...