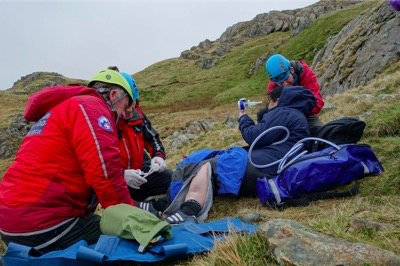 Today was interesting in many ways. It is St David’s Day and the 12 anniversary of my Mother’s death, she went ten days after my father and I try and celebrate both their lives each year by doing something that I would have done with them. Given I am in North Wales and the weather cleared briefly I decided to climb Snowdon, the first mountain I ever climbed with them many many years ago. Then and the route was the Pyg track which is best starter route. It starts higher, is well engineered and it is difficult to get lost. I started fairly late as the weather was bad and it was a fifty-fifty decision to risk it. I chose the Pyg Track as there would be other people and if delayed a return via the Miner’s track allows for easy navigation with a head torch.

As things turned out the weather cleared unexpectedly and I set off in winter sunshine, the view down to Llanberis and back to the Gliders as attractive as ever. I’d packed the crampons plus survival gear and took the ice axe rather than the trekking poles. I was making good time and throughly enjoying myself as I approached Bwlch y Moch I was met by another walker in an agitated state. It turned out his companion had slipped and had either sprained or broken her ankle. We ascended and found Emma in considerable pain with a pretty obvious break. A quick phone call to Mountain Rescue and her companion went down to guide them up while I stayed to look after the victim. Any movement of the ankle produced a scream, but I managed to ascertain that while there had been bleeding it had stopped so it was a matter of keeping her warm, protecting the ankle and waiting for the Rescue to arrive.

Chatting with her was interesting; she had never been in the hills before but had always wanted to climb Snowdon. She persuaded a friend to take her and had made it to the foot of the zig zags before she decided enough was enough and set off back. She was wearing light weight trainers and a set of cotton slacks which is exactly what you should not wear at any time of the year let alone winter. It turned out she had been told that, but this was a Liverpool mother and you can’t say no to one of the those. We had to wait the best part of two hours and had a great conversation. I was there to distract her from the ankle so we talked about children (she has three), Government cutbacks, Liverpool culture and many other things. Laughter was common as we shared a black sense of humour which was appropriate to the context. What impressed me was the way she kept talking about how beautiful the mountains are and how she wanted to come back properly equipped. Two ravens came to join us which is a part and parcel of the land as were the goats that impress all new visitors with their agility.

To cut a long story short the rescue team arrived. A full cylinder of gas and air plus morphine got her to the point where the leg could be moved (albeit with several screams) and secured. Asked to estimate the pain she said worse than childbirth and I can believe it. When her leggings and trainer were cut away she had an exposed fracture of the tibia and fibula and you could see the bone, so I was more impressed with her stoicism. Stabilised and secured, the helicopter came in, dropped off a winchman then circled until she was fully secured at which point she headed for Ysbyty Gwynedd. I’d given her companion directions early as he aimed to get there before her and that was poignant. I knew the way well have driven there every day for the best part of three months when my parents were dying.
All in all, I lost three hours so I more or less decided I would not be able to make the summit. But I made good time and aside from one tricky section at the top of the zigzags where I needed crampons, the route to the summit was clear. My delayed arrive worked out well as I got there in a break in the weather and was rewarded with the wonderful light you get towards the close of the day in winter. I made the top five minutes before the deadline I had set for a return. I needed to get onto the Miner’s track before sunset and that I did. A longish walk back in the twilight but most enjoyable. What was not entertaining was encountering a group of even more foolish walkers on the way up.

Just after Bwlch y Moch on my ascent, I passed a small party of five school kids and their teacher. Orthodox Jews their only headgear was a skull gap and they were wearing white dress shirts, school trousers and trainers with only lightweight tops. The teacher or ‘leader’ had no rucksack (so no emergency equipment, was dressed in a suit and tie and seemed unconcerned. Foolish I thought, but I assumed they had done a limited up and down. Five minutes later I came upon another group from the same party similarly dressed. Then fifteen minutes later another group of three hauled into care huddled together trying to work out which way to go and freezing cold. I sorted them some food and drink (which meant I skipped lunch) and found they had been to the top and were returning. Over the next hour I found various members of that party strung out over two miles of path with the teacher, or responsible adult striding out ahead without a thought to bringing up the rear. I gave them chapter and verse and just how badly they were equipped, set them off on the right path and suggested they deploy their mouths to deal with the leader on return.

The foolishness of people in the mountains never ceases to amaze me. The rule in winter is that you might have to be able to survive a couple of nights. That means spare closing, spare food, torches, bivy bags and (in winter) crampons and ice axes. I don’t blame Emma, it was her first time and she turned back at the right point. She was unlucky to slip. But that teacher or youth leader should be fired from any responsible position. If any reader out there has any clue as to which group it was let me know. I’m angry enough about the risk to kids to make a fuss about it.

Video of the airlift

Pictures of the walk

I haven’t opened a post here with a Gaping Void cartoon for a bit so ...

It is fashionable in systems thinking and complexity circles to use Scientific Management as the ...