This is the second post in my three-part series on creating aporia and I will admit I was worried yesterday that I would struggle to get to three approaches in the aesthetics category. But when I thought about I realised there was a lot more and I ended up with a round dozen in three groups. I am using aesthetic in the sense of anything which is not linguistic or physical.  None of these boundaries are definitive of course and the three posts and sub-divisions therein are simply ways to organise the ideas for easier understanding.  Nor is there any particular reason for the sequencing of the posts, indeed as art comes before language in human evolution there is an argument I should have started with it.  In effect, this post is about art, aesthetics, semiotics and the like, but not about playing games with language itself.  Thomas Merton sums it up well:  “Art enables us to find ourselves and lose ourselves at the same time.”

Yesterday the banner picture was of my collection of Welsh Poetry and the earlier post had a picture of one of my bookshelves so for today I took a picture is of the ‘wall’ behind my desk.  I say ‘wall’ but it is, in reality, the back of a set of bookcases that face a wall of bookshelves to form a book corridor.  There is another book corridor to my left and I sacrificed the floor area for books several years ago but I am starting to reach capacity again.  So all the history books are about to move to the sitting room, and the novels will move from the sitting room to new shelves in the spare bedroom and all will be well for a period.  But all my many and various works of art are not on display.  The banner picture has a part of my collection of  Gaping Void illustrations and when I can I rotate them. 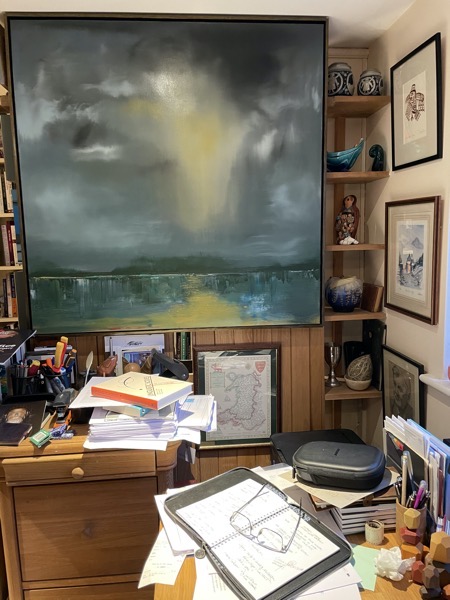 Gaping Void are long-term friends and also partners who are brilliant at using art to achieve understand and manage change.  You can also see that a part of the Starbucks city mug collection is also visible (158 & counting).  I couldn’t fully eliminate the reflections from the glass of the picture frames for which apologies.

Not all the paintings and drawings, not to mention awards, I have gathered over the years are on display.  But the ones with real sentimental value are, and the monumental oil painting I bought in Melbourne has its own place (see right).  Unfortunately, my wife didn’t like it so it is in a more confined space than I planned but I never get bored with it.  You can also see various artifacts gathered over the years.  The Beer Steins were brought back from Germany by my mother when she studied there in the late 40s and there is the storyteller doll from Santa Fee along with some other items of my growing collection of works by indigenous artists using modern materials and techniques; I’ve always been interested in fusion, in art as in cooking. There is a drawing of Wales at the time of the Treaty of Montgomery before the loss of Welsh independence (we are England’s first and will probably be their last colony).  The Raven, my spirit animal, was a gift from Canada, an etching of my sacred mountain, Tryfan is then followed by a line drawing of Nye Bevan, creator of the NHS (although Lloyd George another Welshman got that started) and drawn for me by Conrad Taylor back in the 70s when we were both at Wick Court.

I’m not unique in acquiring such material or in displaying it. I haven’t shown you all of the window ledges stuffed with memorabilia from four continents but the picture to the left shows more of the Mug collection along with two oils and one etching with all of which have a strongly Welsh context.  There are more books, family pictures, and various electrical items used for the bike and for walking.  The glass shelf has many memorabilia, including (near to shot) the first-ever speaker gift I got at an event in Milan. It is a shell with a silver exterior and still one of the best gifts I have received.  These days I tend to accumulate local Gin!

Meaning in invested in objects, and we love things that feel or look good and which, critically ask in questions.  Art in human evolution is critically linked to innovation and the ability to think differently about things.  They are part of the scaffolding (to borrow a term from Andy Clark) of our consciousness, and a form of communication in their own right.   What other people display is important information and I always make a point of looking at people’s bookshelves if I am invited into their home or office, it can tell you a lot about a person to see what they are reading, or rather the dominant pattern of that reading.

In my normal style, I have probably spent too much time in setting the context and doing so from a personal perspective  But that is one of the attractions of blogging as a means not only of communication but of gaining understanding,  The enabling constraint of bear daily blogging is wonderful for creativity and I often work things out as I write. The process of writing myself into the blog post is a creative act in its own right. In another related context, some of my best ideas have come from teaching or speaking.  But it’s time to get to the approaches and I have organised them into three groups to make it easier to navigate.

Use of artists to create material

Macbeth first folio is by Matt Riches on Unsplash

My post of the day before yesterday expressed concern about the general dumbing down of ...

In this final, for the moment, post on creating aporia I want to focus on ...