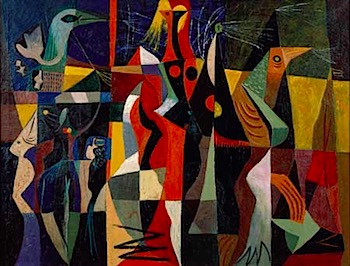 Yesterday’s post was about the need for abstraction, something I recognise years ago when I first met Max Boisot and incorporated into the first version of the Cynefin framework. Later I realised that it was the basis to my long term intuition about using triad based signifiers. Interestingly my initial musings about that didn’t get traction with Cynthia at the IKM meeting in Dublin so the idea lapsed until I brought it back post IBM but in a different form. I suspect that my current understanding of both reason and form had been present and capable of articulation back then the reception might have been different. One of the things I have learnt over the years in respect of collaborative working is to influence but only dictate in the context of dire need. I always have enough ideas swilling around that I can probe what gets picked up my colleagues and let some ideas go on the back burner. Interesting the first real use was a Welsh Audit Office project where I stuck to my guns despite the opposition of all colleagues who were happy with dyads. By then I had worked out the why as well as the how and it was no longer just intuition that guided practice. Context as I have said so many times is key.

Yesterday Florian Otel who is a long term Twitter link asked this question:

Am I reading it right: codification & abstraction (ala Boisot) preceeds internalizing (Polanyi), then new context re-applying ?

Now I was tempted to simply reply yes, but then I thought better of it. Boisot and Polanyi are probably the two best thinkers on knowledge that I know although neither are fully understood. Nonaka in particular quotes Polanyi but fundamentally misses the point about tacit knowledge being critical and no explicit knowledge existing without a tacit component. I may come back to that tomorrow but lets leave that for the moment. The key focus of Boisot was always energy efficiency and one aspect of the I-Space was to show how codification at a high level of abstraction enables faster diffusion.

Max and I had long conversations about this over the years as I understood abstraction in a different way. Max saw it as the consequence of knowledge over time. So a Banker can work at a high level of abstraction as the nature of knowledge has moved way beyond concrete numbers, in contrast he saw a Zen archer as working at a low abstraction, low codification point as the knowledge cant be rendered abstract to be communicated other than through experience over time. I was using abstraction more as the capability to enable abstraction. So symbolic art is a prime abstraction rather than a secondary one even though it starts as a representation. As we went backwards and forwards over the years I think we agreed we were talking about different aspects of the same thing.

The real point I moved onto from my first meeting with Max at Warwick, courtesy of Yasmin (who I am still working with now she is at Hull) was a focus on the need for shared abstractions to allow knowledge flow rather than information management. That got me into narrative as (with homage to Max) the most energy efficient form of shared abstraction. Now with SenseMaker® it means that the descriptive addition of meaning that the triads provide a means to share information over silos and in different contexts. It also means that internalisation is more about creating a metadata layer that allows information to be taken on at need in fragmented form that can then adjust to radically new contexts.

So I think the answer to Florian is still a yes, but its a yes but with a lot more to explore.

One morning, upon awakening from agitated dreams, Gregor Samsa found himself, in his bed, ...

My first full day in New Zealand involved some interesting meetings and a presentation ...