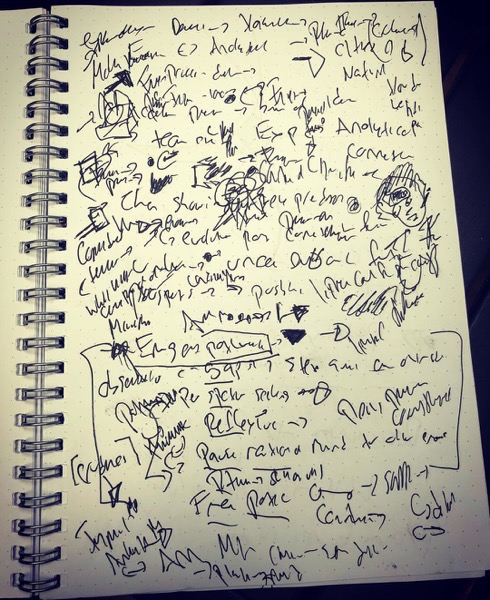 So its now Wednesday and we’ve had a whole day of synthesis here at the Cynefin retreat in Whistler, focused on decision making in human (and non-human) organisations.  Mike Cardus tweeted a page of his notebook which I replicate here to give some idea of the creativity in process!   The banner picture is the ‘hut’ to which I was able to retreat at the end of each day.  The essence of the Tricopticon process is to reduce the impact of the facilitator on what emerges with the idea and intention that what arises is sustainable for, and authentic to, the needs and capabilities of the group.   I still remember when Tony (one of the main architects of the DataSciences Genus Programme of which more later this week) and I were put through the IBM facilitation training shortly after acquisition.   The whole thing was a tightly controlled dance in which the role of the facilitator was to reach a result that would (i) position the client to want our services and (ii) make sure the client was happy and wanted to come back for more.   Now to be clear i have no problem with either outcome per se, but I don’t see it as a primary objective.  Learning is often disruptive, it can disturb convention and make people think differently.   Inducing trauma is, in the main, wrong but the tempering not tranquillising for quiescence is a different matter.

One of the reasons Tony and I were sent on that course was our work on the JAD (joint application design) workshops.  That had triggered some ideas for me and I got agreement in IBM to create a new facilitation environment in which we had high volume participation.  Its something I’ll be writing up in the new Complex Facilitation handbook and associated methods we are putting together.  But the essence was multiple interactions between people of diverse backdrops, holding off solutions for as long as possible to allow fuller exploration of options.   This was before I got into complexity and realised the importance of avoiding premature convergence.   That work and those principles continued on through multiple engagements in IBM and then Cognitive Edge.   One of the things I often found was that new methods or approaches emerged in the process of interaction and today was no exception.

So the process today was as follows

Tomorrow we present those ideas for review and then close down with learnings overall before departing after lunch.   More tomorrow

So its Tuesday, second day of this years retreat at the Brew Creek Centre near ...

So its over, and in terms of process and engagement one of the best retreats ...