A sense of direction (2) 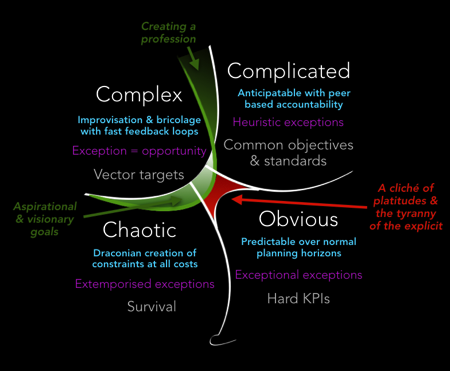 Having written yesterday’s post I started to play around with mapping various approaches to measurement, goal setting and the like onto Cynefin. One of the values of any framework for sense-making is that it pushes you to think beyond the immediate and the the additional of the liminal zones Cynefin now provides seven domains to play with. The basis of Cynefin in natural science also means there is some legitimacy to such speculation; domains represent reality so something must exist in those realities which is contextually appropriate. A well founded framework is a way of asking: What have I missed? Carrying out the exercise also confirmed to me in the value of the liminal version of Cynefin and critically the resolution it provides for a long term issue of what to do with the Disordered domain.

The key concept there is that of contextual diversity of approach rather than adopting a single and inauthentic universal. It’s not just about how we measure its also about the social processes which allow the exercise of human judgement. One of the problems with the consistently crude application of an engineering metaphor in common forms of systems thinking has been an attempt to remove human judgement, to make everything measurable, to reduce decisions to bands on spreadsheets. Now this is not true engineering, its the misunderstood application of the metaphor by the management consultancy/methods industry which rewards tawdry, meretricious vulgarity. We are starting to encounter this with complexity at the moment. I’ve seen, and had the misfortune to have to read, some truly trivial and inconsequential books and articles over the last year as the ideas of complexity have become more popular. Too many people rebranding tired methods to try and given them a second life. Shoring things up until Christmas to quote Spike Milligan.

OK diatribe over but I’ll return to it and meretricious is one of those words that deserves a series in its own right. Now lets move onto the categories and in this post I’ll deal with the ordered domains of Cynefin and the inauthentic aspects of Disorder. Complexity, Chaos and Liminal will come in subsequent posts.

This was the subject of my post of yesterday but the two targets (sic) of my criticism then are different in their nature. What I deemed as the tyranny of the explicit is the attempt to structure material which is not yet (or may never be) at the point where this is viable. We might term this premature codification and it is exemplified by Sick Stigma and unSAFe to take two modern examples, the former fading the later starting to fade but not before causing considerable damage. In Cynefin terms this is an attempt to shift from the Complex to the Obvious (or in part Complicated) while there are still multiple modulators in play, many connections and the probability of unintended consequences high. Much as order may be desired by organisations that does not make it possible. I had a debate with one SAFe advocate lately (who is also a Sick Stigma Black Belt which says it all) who argued that whatever a customer wants was right and we should speak the language of order regardless. That may have short term pecuniary advantage but in terms of ethics and long term credibility and viability is a different matter. In practice this is attempting a shift, when a shift is not possible resulting in being stranded in inauthentic disorder.

A cliché of platitudes on the other hand is something very different It starts in disorder and stays there. By assembling a series of statements that no one can disagree with, or which anyone can use to explain away more or less anything, they celebrate disorder through the fetishisation of the anodyne; avoiding responsibility for anything uncomfortable or difficult. Often well intentioned but …

In this domain we can make accurate predictions of future states based on our knowledge of the present. The future is predictable, the pathways to success and failure can be known within normal planning horizons. In this domain we can apply KPIs to most aspects of what we do or plan to do. They can be explicit in nature and largely independent of human judgement. Even now there needs to be some doorway, some mechanism for exceptions even if those exceptions are exceptional. To use an example driving on the left in the UK and Australia is best practice but if a child runs onto the road in front of you following the rule is not legitimate. Too often in organisations a rule is a rule regardless of context. I saw that in IBM on some sexual discrimination cases where a manager had used an annual appraisal for misogynist purposes. The evidence was uncontroversial but the process didn’t permit exceptions. Faced with prosecution the victim was bought off rather than challenge a rigid process. The excuse that one followed orders has a poor history in human thinking and the same applies to excuses of following process or rules. The rigid application of rules without allowing for exceptions puts one on the boundary with chaos in Cynefin rather than the legitimate use of best practice.

Here we have a discoverable aspect to predictability but the relation between cause and effect is not self-evident to all. Here expertise is needed to make decisions quickly. In a domain of expertise peer review is a part of legitimacy. Here we also have something I am developing as a generic theory and indicator, the question of how many generations the body of knowledge has been in the process of emergence. Professions that have several generations of practice develop training, mentoring and other practices that are are a mixture of the formal and the implicit, with the latter of increasing importance. The practice in hospitals of experienced and inexperienced surgeons, anaesthetists etc. working tougher in teams produced an ability to understand capability beyond the explicit. The reduction of that into competences and scheduling (BRP and Lean Sick Stigma in hospitals) means that there is no tacit knowledge of capability, the use of the implicit so important to human knowledge exchange has been lost.

Too many rule, too many measures here generate too many unexpected consequences. Professional judgement and experience within a peer group allows rapid triage of issues. Creating multiple measures (managers without professional knowledge of the field can’t survive without these) means that judgement is lost in favour or target achievement. We can see in the medical profession people compromising empathetic care and problem resolution in favour of measurement. I remember working with one hospital which had to import surgeons for risky operations as its own staff were worried about their league table status. in Britain recently we have seen Headmasters exclude pupils from exams in order to maintain their league status of A grade results.

What matters in the complicated domain is a significant investment in practice and the development of process which are not dependent on explicit measurement. Also values count here – the Hippocratic Oath for example. But the value of that oath is not in the words (platitudes again) it is in the multiple practices, training and history of which those words are a trigger mechanism. In this domain some failure in inevitable so having few rules and fewer measures, but with heuristics to govern uncertainty is key but only within the context of a tradition of training, apprenticeship and peer review. Of course the downside of this maybe over conservatism or a lack of innovation. Nothing is perfect ….

I had a really interesting exchange on twitter over the last few days. It’s nice ...

A sense of direction (3)

I really should be cutting back on the email and task backlog at the moment ...