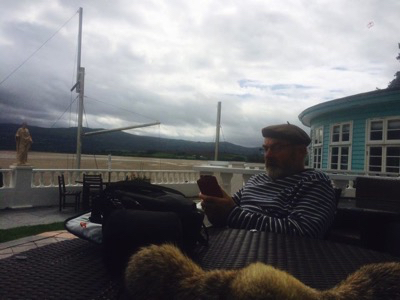 So I’m en route to San Jose to run a two day workshop for a tech giant on narrative as communication, plus three shorter sessions for the C suite on Friday. I’m also feeling guilty as I haven’t posted here for over a month. A technical upgrade to the the web site gave me some excuse for the last week but before that it is simply time. To illustrate the problem I have one night at home at the end of next week before a one week trip to Melbourne, then I am successively in Bangor, Edinburgh, Berlin, Newcastle, Bosnia, India (maybe) and Singapore, Hong Kong (maybe) followed by San Jose again, Washington, Durban and Milan. It eases up a bit in December, but between now and then I’ll sleep in my own bed on six nights in two and half months. Something is going to have to give and I’m looking to avoid any commitments that are not firm to free up time for recovery, thinking and exercise time – not to mention the need to buy a new car. After 12 years I have reconciled myself to the fact that I will not be able to replace the Saab with another Saab and after three recoveries in short order its time to move on. Expectations of car salesmen (they have all been male) of knowledge is a form of reverse sexism. I have no idea how a car works, I just want to get in something and get somewhere safely and in comfort. So buying one is stressful and I have multiple brochures and checklists here in my luggage.

But I need to get back into blogging; I have around 150 stored emails and ideas in various folders so there is no shortage of material. Given the narrative session tomorrow I will update my thinking on that thorny subject tomorrow. Then on Thursday expect a new development on Cynefin; I’ve solved the issue of coupling and constraints and I’m feeling good about it. But I need to teach it to a live audience before publishing and that will be Thursday. I’ve also got about 100 blogs posts to do on various walks, including the Annapurna Sanctuary walk earlier this year and the Round and through Wales trip. I’m now 774 miles after 45 days of walking since I started in March 2014. So around 450 miles to go and I should be it in less than 65 days, possibly 63 if I push the North Wales Coast and the Dee sections a bit which would have a symmetry about it as I will reach that age shortly after the target finish of St David’s Day 2017. I need to do it my then as I am then planning a 15 day, three 5.2k meter pass walk around Everest in March 2017 before that birthday. I’ve kept notes and I’m planning to use those as a basic book on Walking through diabetes which I have been in part composing as I walk.

So material to come and I won’t promise to get back to daily posts, but I will try …..

The picture by the way was taken by my daughter in Port Merion on Monday. She had been on the Number 6 festival crew the previous week and joined me in Aberdaron for what should have been a day trip to Bardsey Island followed by a walk around the Lands end of Wales to provide day 46 of the walk. The weather turned against us so we decided to play tourist. By complete accident I was dressed for the visit. After that we did a quick walk up to the source of the River Severn before driving home over its exit to sea. Not the day we planned; but a good one never the less. Today involved a frantic bout of washing, packing, test driving and a flight.

For the last nine days I’ve been following this sign around the coast from St ...

As promised yesterday it is more than time to update some of my thinking on ...