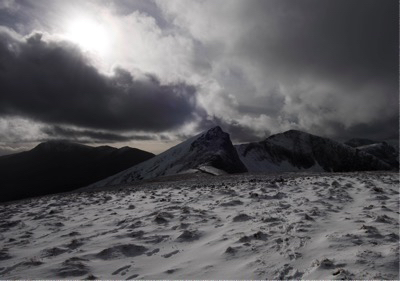 I’m up working in Bangor at the moment bracketing a weekend which gave me the opportunity today and hopefully tomorrow to head for the hills. I’m staying for the first time at Trionos sharing the place with a Yoga retreat group. A connection made from conversations in Geneva with the Red Cross/Crescent about a new programme we are putting together on The making of meaning of which more next week. I’m staying because I’ve got a meeting with the founder tomorrow evening but I think I will be back, restful place and good value for money. A short drive this morning and I was heading up the steep ascent of Y Garn that starts the Nantlle Ridge walk. In summer this is a delight although it requires two cars or public transport using Carnarfon as a base, there being no other options other than a taxi for the five miles from finish back to start.

In winter it is still a delight but a far more serious undertaking. That sharp peak in the centre of the picture in summer is a quick scramble today it took me twice as long with ice covering everything but nothing thick enough to mean that crampons would have made a difference. The header picture is the same peak from later in the walk.

I planned a circular walk rather than the full ridge, but couldn’t resist a quick extension to the obelisk on Mynydd Tal-y-mignedd. After that the descent to Bwlch-y-Ddwy-elor was a nightmare, ice and snow on mud in a thaw. I made it without slipping, but very very slowly. It did give me time to contemplate a summer horseshoe that would see an extension of this over rough ground to Moel Hebog and then a return along the tourist trail, or use the train. I may check that out tomorrow.

So in the mountains, as in most things, context is everything …

I realise up front that there is a danger that this post may be misinterpreted. ...

I choose a shorter route today taking in the circular walk from Llanberis over Moel ...