A light touch on the tiller 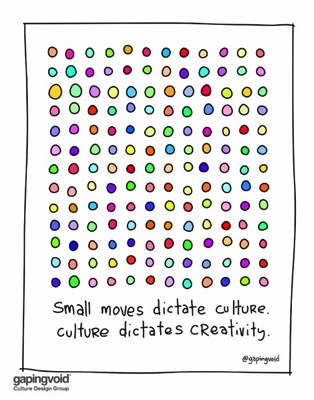 So its day five of the Gaping Void blog month and today’s cartoon brings together my earlier post on small actions with yesterday’s on trust and culture. I made the point yesterday that trust is won through multiple small actions over time, and culture emerges through the same process. If you want to change the way people think and act grand plans with objectives and targets are not only unlikely to succeed but are either patronising, immoral or both. I’ve spent a lot of time over the years dealing with senior leaders who are upset at water cooler stories, rumours and the like that they feel are unfair. Their instinct is to go public with a refutation, something that general makes things worse. I have always counselled a different approach. If there is a negative rumour then do out and do things that make that rumour difficult to sustain. It is a cliche, but true nevertheless that actions speak louder than words. Out own approach to cultural change is based on small changes: What can I/we do tomorrow to create more stories like these and fewer like those. It is an evolutionary approach not an attempt at crude engineering.

But the link to creativity is interesting. I’ve always argued that creativity, like innovation, is a consequence of starvation of resource, pressure of time and perspective shift, the ability to see things differently. As long as we are comfortable we don’t innovate. Equally if we are nervous, scared of consequences, if there is excessive transparency then we don’t innovate either. If on the other hand multiple small actions over time show me that I can afford to take some risks I will do so. If you tell me that I can take risks I simply won’t trust you. Its a classic corporate game to play the trust me card as it sounds good but reality is always different. In this organisation we always tolerate and learn from failure is a nice platitude but in reality it is normally a neo-Darwinian approach to weeding out the fatally naive early on in their career. To return to my theme of yesterday the ability to take a risk is a consequence of a long period of interaction without undue hypocrisy.

A weapon is defined by the Oxford English Dictionary either as A thing designed or ...

The sounds of silence

Not the easiest if cartoons today, its not a condition I often face! But silence ...