I finished in Bangor at lunch time yesterday and then set off for a memory laden trip to Cardiff and thence home.  The first part of the trip from Menai Bridge to Builth Wells I last drove to collect my Aunt so that she could be with my Mother before she died, so it was a journey fraught with memories.  I left Bangor University and drove back to Menai Bridge as I wanted to do the short walk that leads you down to the straits and Church Island then back under the bridge.  It was the last walk I did with both my mother and father before we knew she was ill, but when we knew his end was nearing.  He was inordinately proud, ill as he was of his ability to make the steep slope and its one of my treasured memories.  The winter sun was low and presenting some wonderful views of the bridge and light patterning the troubled waters of the straits.  I'll return here next year as its on the Round Wales Coastal Path, but this walk was to remember and move on.

From there I diverted to cross the Menai by the main A55 and criss crossed through small lanes to join the A4085 from Caernafon to Beddgelert.  This is one of the delightful roads that surround the Snowdon massif.  It twists and turns through small villages that evidence agriculture and slate in equal measure.  There is now a restored railway between Caernafon and Porthmadoc that follows the valley; when I was last here it was just being rebuilt by volunteers now its complete and I made a mental note of its potential usefulness for some linear walks both around Llyn Cwellyn and down the Abergaslyn Path. I stopped at the Snowden Ranger Youth Hostel, starting point of one of the many routes up Snowdon.  We took that path on my second ascent.  This first was up the Pyg Track and down on the train (by Nain and sister came up and down on it) which was much more enterprising than the up on the train and walk down!  I'd asked to climb Snowdon as my birthday treat for reasons that escape me some 50+ years on.  The following year we climbed the Snowden Ranger Path for the first and last time.  It's a tedious trudge up a long slope with limited views, there are much better ways.  But it was my first full return trip, and the first as a family; my sister now able to do most the climb with the odd section or two on my father's shoulders.  I do remember that it rained and that the summit was under clouds, conditions that persisted on multiple ascents over the next few years before we finally achieved a clear day.  The car part now has a nature trail (view pictured to the right) and the Youth Hotel now permits people to park a car.  In my day you could only walk or cycle and if you were caught parking a car around the corner you were thrown out and ignominiously stripped of your membership.

From there, as rain swept in I climbed the valley to Rhyd-Ddu and a car park that was oh so familiar.  This is the starting point for two of my favourite routes up Snowden, one climbs directly up the ridge, the other heads for the saddle between Aran and the South Ridge.  On the other side the like is the near vertical climb that leads to the ever delightful Nantlle Ridge that was a favourite solo trip.  Today Y Garn was shrouded in rain, but it was a day that with more time I would have just set off.  There was always a delight in walking in rain and I realised I had lost that delight and needed to rediscover it.  I grabbed a few photographs protecting the camera with an umbrella and, with regret moved on. 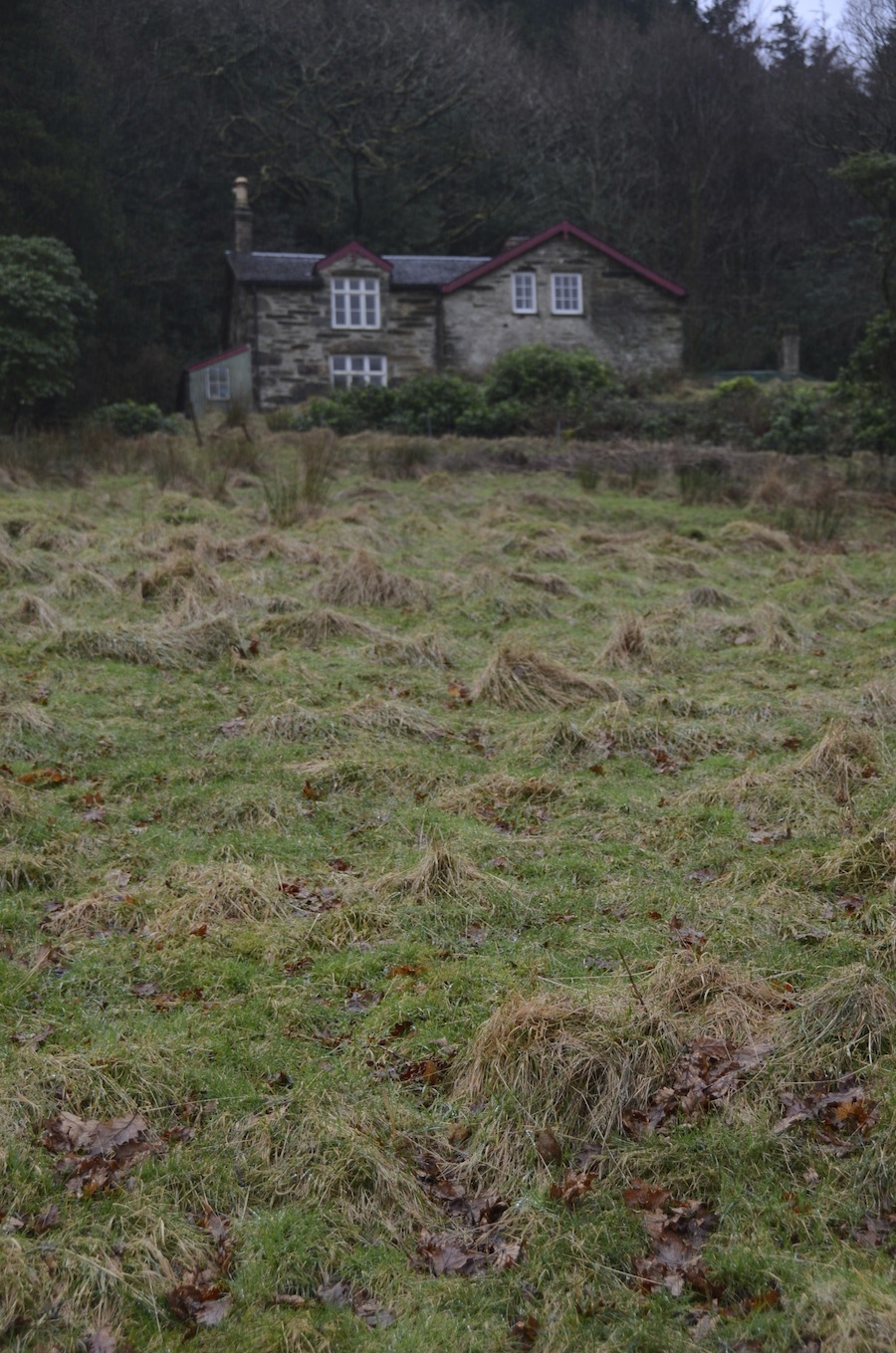 Beddgelert in the rain is not an attractive proposition and I abandoned by plan to walk along the river.  Instead I headed up to Afon Glaslyn and the start of the Watkin Path.  My all time favourite walk up Snowden is to head up this, past the Gladstone Rock and then head left to the summit of Yr Aran, before plunging down to the saddle then up the South Ridge to the summit returning via the Watkin Path with its initial scree slope that allows (in younger and fitter days) a very rapid descent of 1000 feet before a gentle stroll down miners paths back to the car.  As I looked around I suddenly realised that on the hill behind me was the cottage where I spent my honeymoon (pictured).

It was where I discovered that when he declared liking of hill walking meant something very different for someone who grew up in Kent to my own meaning of those words.  It was half way up the Devil's Kitchen in snow and ice that she finally raised the issue and accommodations had to be sought!  It was so cold that we moved a mattress down to the living room so we could sleep by the fire and I spent a lot of time chopping logs!

The cottage was owned by Trish's family, a friend in SCM and we were loaned it.  We also used it later for a team meeting and had a great time climbing Cnicht (the Matterhorn of North Wales) as well as messing about on boats, drinking in the Prince Llywelyn Pub in Beddgelert.  We also played a long and elaborate game of risk that went on for five days involving multiple  betrayals and much conflict!  Odd the memories that come back when you see a place after a long absence.  I was starting to realise that this journey was important as catharsis; I had neglected these valleys for far too long and returning was a form of healing. 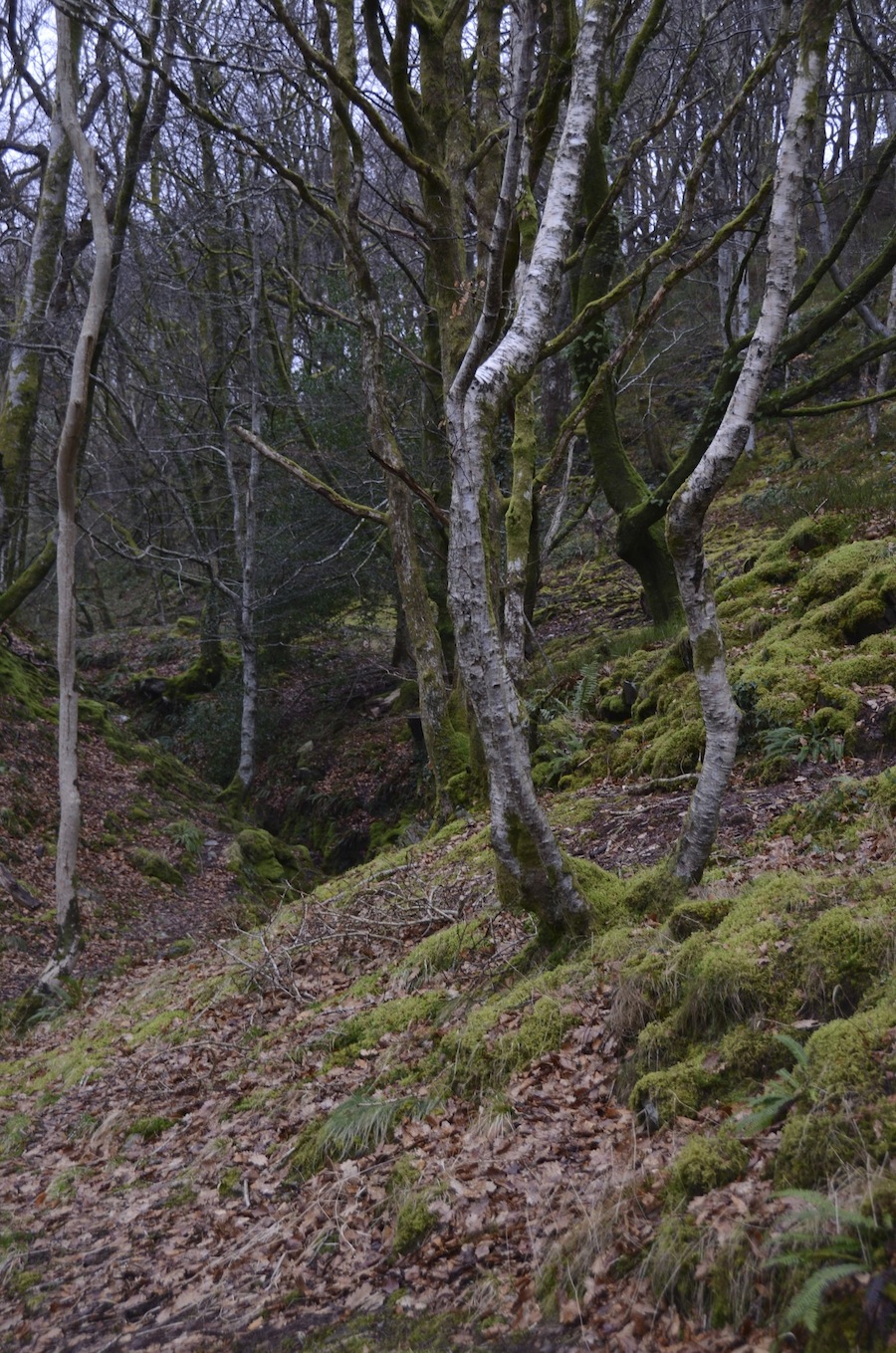 The rain was set in for the day now but Snowdonia has its own charm when the rivers are full and mountains disappear into cloud.  The mountain route to the B4410  was the next stage before I pulled into the car park at Llyn Mair.  Now this place has many, many memories.  When we were taking the children up to see my parents we often stopped here for a picnic.  Eleanor on one occasion ran up the hill disappearing within seconds, which given she was three was worrying, but I finally found her sitting on a tree root looking back over Llyn Mair, delight dancing in her eyes.

A decade or so before I had navigated my Uncle Ron, used to driving the duel carriage ways of Cardiff through the narrow mountain road to take a trip on the Ffestiniog Railway.  I had no idea he was scared out of his life by the drops on either side and suffered parental disapproval (softer by a glint of amusement in my mother's eye) as a result.

At 18, with my friend Nick Keeley (whose birthday it was by coincidence) we had failed to hitch back from a holiday on Abersoch and got home by a complex combination of trains, buses and walking including a pretty tiring section past the lake.  Thanks to Facebook I am back in touch with Nick (and George who was also on that holiday) after too many decades.   I have just about forgiven them for manipulating me onto to a boat so they could have free range on the two girls we met ….. 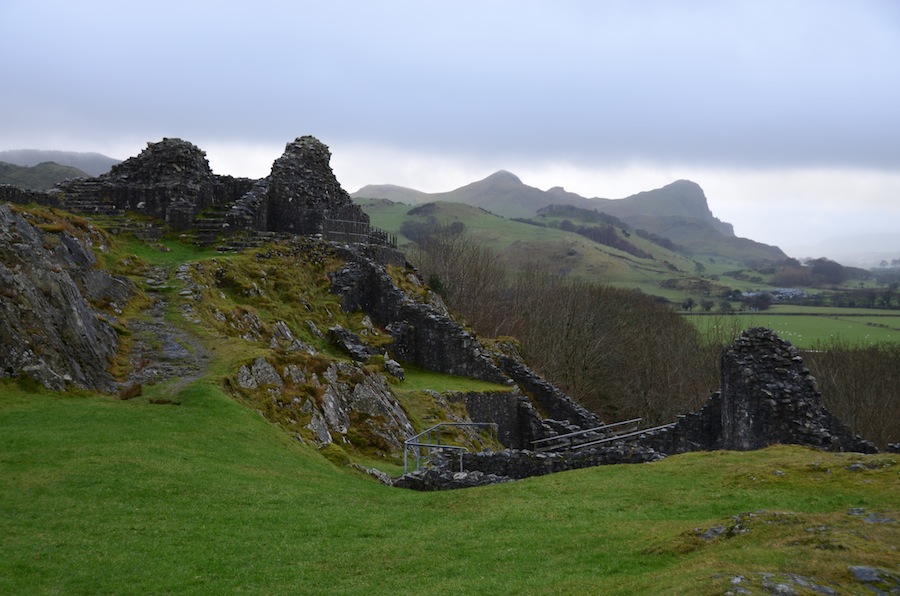 Happy now, with sense of return and celebration I headed over the hills of Dolgelau where I stopped to refresh my coffee and then over the hill to Minnffordd and my hotel for the night.  I got there early so I broke from my memory trip and diverted via Tay-y-llyn to Castel-y-Bere and Mary Jones House, neither of which I had visited before.   Castell-y-bere is a Welsh Castle, built by Llywelyn the Great and like all Welsh built castles it folds itself into the natural contours of the hill.  The castles of Edward I, magnificent as they are impose themselves on the landscape, they are not a part of it.

I wondered around in the evening sunlight interspersed with rain and then drove down the valley to see the monument to Mary Jones and her monumental barefoot journey to get her first Bible published in Welsh.

As dark grew in I headed for the Minffordd Hotel (opening picture) where I was the only guest, but received great hospitality and went early to bed.  Some journeys open up possibilities, some resolve issues.  This one did both.

My original plan for today had been to get in a days walking in Snowdonia, ...

If you have just driven for two days through some of the most delightful scenery ...