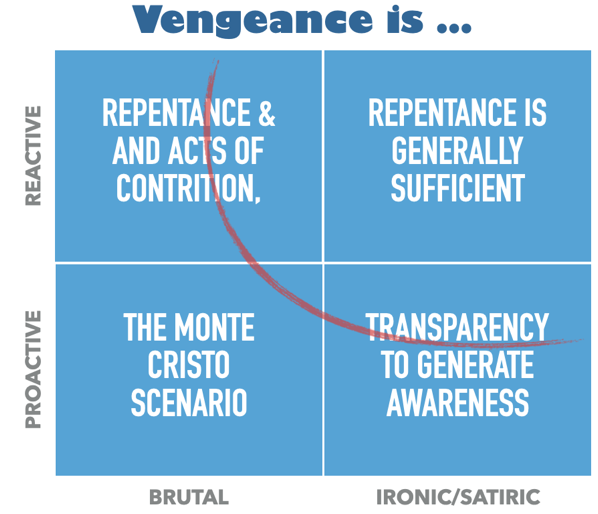 Writing the first part of this a couple of days ago was very therapeutic, I got a lot of anger out of the system and slept well in consequence.  And in response to those who have asked, no I won’t name names or give any more clues.  The post certainly attracted attention in social media so it would appear that sin and vengeance are good popular themes!

Today I want to move on to the vengeance question and that necessarily involves the idea of repentance and contrition.  So today’s matrix is designed to overlay the earlier one.  To explain the dimensions, on the vertical axis I have identified a key difference between pro-actively seeking revenge and simply reacting, take the opportunity as it presents itself.  On the horizontal axis I have contrasted a brutal and direct approach, with one with is either ironic or satiric in nature but altogether more laid back

Before we go any further, I will repeat what I said in the first post that this is all a bit of fun and designed to be taken with a pinch of salt, but there is also some serious intent or value that may emerge in the future.

The two other concepts I have introduced here are repentance and contrition, or to be more specific, acts of contrition that necessarily incorporated ideas of penance.   Repentance generally means an understanding of having done the wrong thing and, critically, a willingness to do something which indicates a clear intent and purpose to do better next time.  Just to be sorry is not enough and if you start to proffer excuses then you are not demonstrating repentance.   Acts of contrition go a stage further and require you to do something now that demonstrates your knowledge of failure and provides some recompense for that.  This goes beyond being sorry into making amends; weregild or blood money is of course one way but there are others.

So that gives us our four matching options as follows:

Now one thing you may have noticed here, taking revenge is only suggested in one of the boxes and then the main motivation is defensive, I think Dantès was taking things too far, and part of the novel is that he realises that for himself towards the end.  I drew a slightly arbitrary red line on the matrix and generally anything to the left and down needs a response, anything to the right may be best ignored.

One thing I have over the years is not to let a breach of trust or even multiple breaches stop you from trusting others; better to be betrayed a few times than close in on yourself.

Now all of this, which started off as stress relief with the intention of being an amusing sideline between more serious posts, has turned out to be more serious than I thought.  It has reminded me of the way in which institutions can be manipulated by the unscrupulous and also the wider issues of the abuse of power, also how you deal with the abuse of others if you are also in a position of power.  That, in turn, resulted in my making notes on questions of sacrifice last night and hunting down some of the papers I have (and wrote) on Dietrich Bonhoeffer back in the 1970s (and no you can’t see them as I am embarrassed by them) when I was spending a not insignificant part of my time crossing the wall in Berlin.  So expect some more serious posts on this whole issue of abuse, power, sacrifice, and hope in society and in organisations downstream.

We are now at the stage where we start to dig into the patterns and ...

Things are building nicely for our Exploratory next week looking at the connections between sense-making, ...