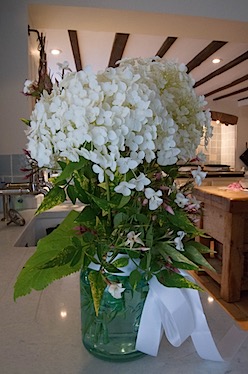 A brief tribute to John & Judith

A difficult day as its main focus was the funeral for John and Judith Woodget of Dene Farm here in Lockeridge. They were both killed in an accident on the A303 a week ago and add to my growing list of unnecessary deaths. They came to the area before we did and moved into Dene Farm shortly after we arrived. John was UK MD for Intel then Sales and Marketing Director for their EMEA region before retiring recently. Judith ran a garden design service from her home. Both were major actors in the day to day necessities of village life: the parish council, the governing body of the local school, traffic calming measures in the village. Without Judith there would not have been a book club in the Valley and many other activities beside. My wife commented when we were walking back from Overton Parish Church they never changed their principles or beliefs when they became well off but stayed the level headed ethical (and I used that word with care) human beings they had always been. Always curious, always open, always interesting and interested.

For the funeral we were all asked to contribute flowers from our gardens. Most of those had been influenced by Judith to some degree. In our case she and my wife designed the whole thing, and redesigned in on several occasions with the intention of creating a Cottage Garden. Our contribution from that garden is shown in the picture. All the contributions were left outside the porch of the Church and there was not a formal bouquet amongst them. Small and large tributes alike all had a wonderful informal, just gathered from the hedgerows and fields look about them Small springs of lavender tied together with rough cloth, a profusion of wild flowers and leaves. All gathered in at the end of placed in the grave along with the wicker coffins. They now lie in the graveyard near to another village stalwart Edward Baliszewski who we lost to cancer in 2008.

There is something peaceful about a village funeral. We had to stand outside as the Church was filled leaving around thirty of us outside with the floral tributes straining to hear Matthew’s tribute to their lives and the eulogy by Maria Shepherdson. A lot of those present were from Intel and had travelled for the occasion but they seemed to be a part of the landscape and to have one mobile phone go off is not bad for this day and age. Young children were brought out during the service to dash for the portable toilet discreetly placed by the Lychgate, then escorted back in with exhortations to silence. Earlier the cortège had wound it’s way up the lane from Lockeridge to the Church in Overton. The service itself was a delight, opening with Wish you were here from Pink Floyd and concluding with Always look on the bright side from Monty Python. We also had the New Zealand Anglican Church’s variation on the Lord’s Prayer which itself was a statement.

A curiosity here, Lockeridge is the only village mentioned in the Doomsday book not to have a Church. The reason is that we are a rare example of a planned Templar village, growing after the collapse of Shaws as a result of the Plague and the village was linked to their temple at Rockley. So we share a Church with adjacent Kennet Valley Village of Overton, they we host the shared Primary School. I mention this to give some idea of age and to suggest that both John and Judith were in that tradition of care which has preserved the village over the centuries.

I was looking up John’s profile on Wikipedia in order to check my facts and found this recommendation:

A few times in a long career you meet people who really makes a difference as rolemodels. John is one of those. He really knows how to grow people by empowerment and create new business opportunities. One of the most exciting things with John is that after many years with Intel he still has that genuine and “young” curiousity to understand, learn and extract new ideas from people!

That not only matches my limited knowledge of the man, but also reflects the view of those who encountered Judith. It can stand tribute to them both. They wanted to grow people and communities and remained excited and engaged until their tragic premature death. My heart goes out to Matthew, Lucy and Sarah their children along with their four grandchildren. John and Judith will not just be missed, they leave a hole in village life which will not easily be filled.

One of the golden rules of sense-making is that any framework or model that can’t ...

A few things came together this morning: the quote on growing people through empowerment ...