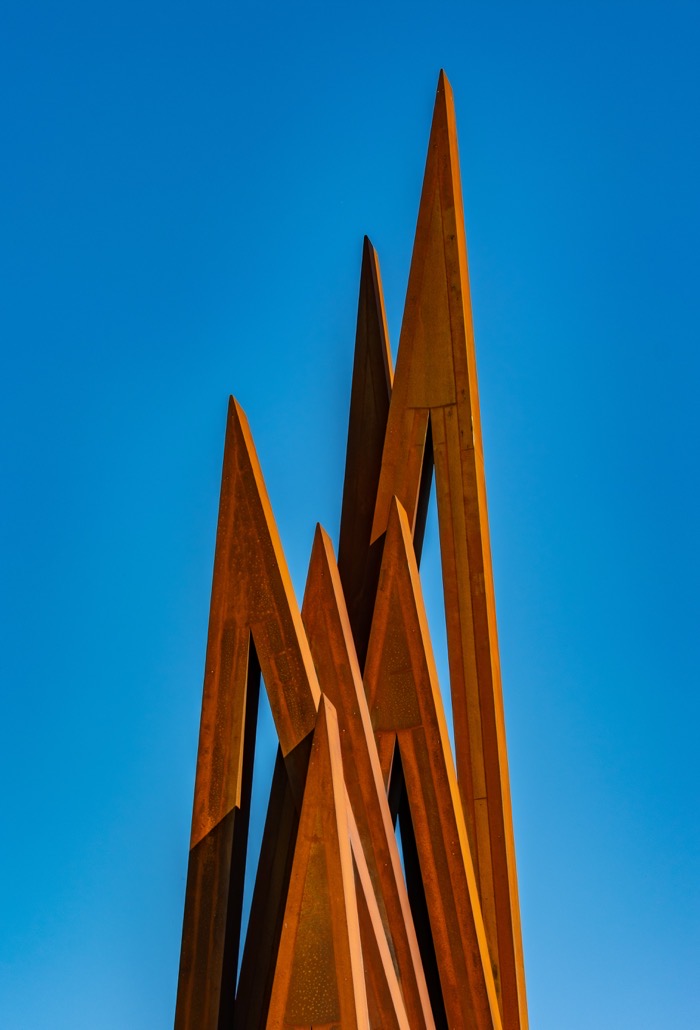 The theory post of yesterday came with a health warning and this one does as well – There are some things that really irritate me and drove these two posts so the next three paragraphs are polemical, jump to the new method if you want to avoid them

Anyone who follows me on social media will know how annoyed I get with people creating simplistic tables with two columns.  In the first column various existing practices are redescribed to indicate how evil they are, and then in the second column the qualities of sainthood, which of course no one can disagree with, are listed.  The implication is that the person who created the table is the person you should engage to lead you on the path to enlightenment, taking you to the mercy seat and then baptising you in the true faith.  If the table is produced by one of the large consultancy firms then it is of course understand that you will not hold them to account when the promised land is not flowing with milk and honey.  Instead, you will realise that the failure is all down to your lack of faith and true commitment and you will then be willing to start the whole cycle all over again.

I’ve seen these all too many times over the year and the Agile community is the latest to adopt what I call the Billy Graham approach to change.  You are admonished, in the words of St Peter (1 Peter 5:8) , to “Be sober, be vigilant; because your adversary the devil walks about like a roaring lion, seeking whom he may devour”.  My historical approach to this pernicious nonsense is to call shame on crude dichotomies and gross naïveté.  In general, all the stuff on the left still has value in context, and all the stuff on the right, if it is not pious cant, is idealistic, doomed to succeed in part but never in full.  Not only that, it is deeply context-specific.  One of the drivers to create the Cynefin Framework was to create a both/and not an either/or approach to the adoption of new methods and approaches.  I generally come out of the exchanges having some understanding of the reason for the various lamentations of Jeremiah.

In my more considered moments, I point that that dichotomies would be better considered as some form of dialectic.  For those who know their Hegel, the anti-thesis which claims to have rejected the thesis is often based on the same assumptions but creates the space for a new synthesis to emerge.  There is a general message here, and we see the same in revolutionary movements in science.  Those who discover the change are still within the old paradigm and find it difficult to throw it off completely, but the next generation can.

But people won’t stop creating dichotomies so that means we have to think of a new method rather than just saying it’s wrong.

The idea is to look at how we can take the dichotomies and make them something more interesting instead.  In yesterday’s post, I referenced our work on entangled trios and also SenseMaker® use of triads for signification.  Having to interact with two different people, or balance three qualities creates the type of cognitive load that makes you think differently.   If you have a degree in philosophy then the distinction between dialectic and dichotomy is something ingrained into the way you think, but it’s not natural especially for a very busy C-level executive.  But balancing three things is something we all understand so that might work.

There is also a general principle of complexity interventions bu which you start with where people are, rather than where you would like them to be.  And one should really be consistent with your own principles.   So given all of that, I started to play with different options that could be used in a workshop, virtual or physical, to get people to think differently.  So I need to name this, but it is another method in the family of complex facilitation family. Provision name is ‘trialectic’ but I am not wild about that so it may change.

My basic idea was to take two familiar things, the dichotomy, and a third element, an Aleph to reference Borges.  The UK political context makes Soja’s Thirdspace far too close to third way for comfort but the idea has a lot in common. 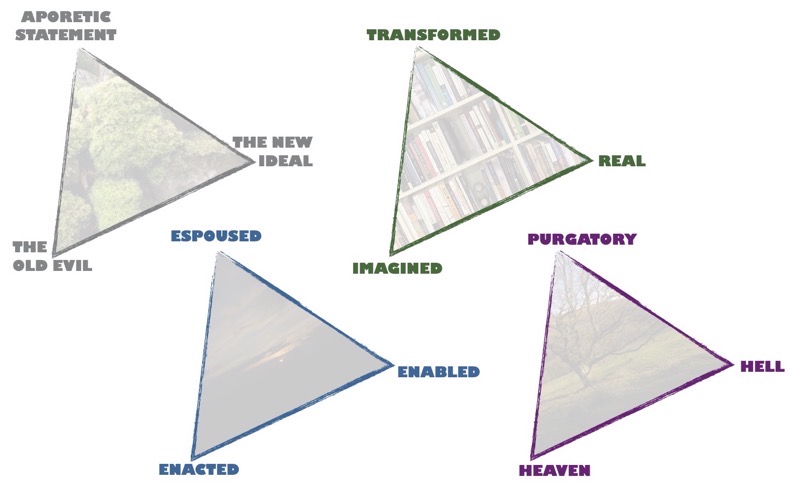 The third element needs to have mystery, ambiguity or more critically something that cannot be resolved other than by radical rethinking and possible radical different actions.  I also wanted to create something that allowed for different aspects of the organisation to be in different places.  So I played around with pen, paper and keynote and came up with a very provisional set of four types that could be used and drew them – see to the right.   All four give different starting points but can be easily summarised below,  The idea is that in each triad people position ‘things; in a balance between the three extremes and ideally without knowledge of where other people have placed them – them we look at the pattern overall. I’m also pretty sure the names of these need to change as well by the way.  I’ve also displaced the triads by 45º and I would rotate them in multiple ways in practice as a way of disrupting pattern entrainment

Those need to evolve and there are probably others.  But the approach is simple, take something which is positioned as an either/or privileging a future state and throw it into a degree of deliberate confusion (another name for aporia) in which the current two-way choice is no longer sustainable without modification.  The scatter maps on the triads from different sources then give you a very different mapping of the conflict.  We can also build a SenseMaker® diagnostic for this as part of MassSense so I will work on that in a few weeks time,

This is very early stage disclosure by the way.  Normally I would have had the ideas of yesterday and played with the ideas of today in a workshop and see how they panned out.  Thanks to COVID and lockdown I can’t do that so I am taking a slight risk here and exposing ideas without first attempting the practice.  My idea is to engage people in the process as early as the method develops.

All and any comments welcome and I will put a version of this on the Wiki in a couple of weeks’ time – the rough timetable for us to make it available as an open-source offering.

Warning note: This post is an introduction to a practical method and approach to handling ...

In 2021, the Cynefin Centre hopes that we can start introducing and highlighting the work ...